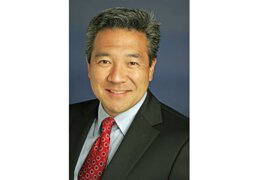 But Tsujihara’s selection was not just a matter of dollars and cents — not by a long shot. In a Hollywood ecosystem where imitation is not just the sincerest form of flattery, but a way of life, Tsujihara has always been a maverick. He’s not only stood out from the home entertainment pack, he’s inevitably stood out ahead of it. He’s earned a reputation as a deliberate disruptor who’s never been afraid to try new things and if they don’t always work out the way he had hoped, well, that’s OK, let’s move on to something else.

And yet he’s not so much a gambler, a risk taker, as he is a shrewd and savvy entrepreneur — albeit one who has learned to operate in a corporate environment. He’s a leader of the pack who also happens to work and play well with others.

Tsujihara doesn’t so much roll the dice on emerging and even future technologies as he plays the field, carefully picking and choosing what he considers to have the best chance at success. He’s not looking to transform the business so much as he is out to reinvent it, rebuild it — in a sustainable way. And if one accepts sustainability as Hollywood’s true holy grail, then Tsujihara’s real trump card is twofold: He’s got the vision to see what lies ahead, and the courage, guts and acumen to follow through and get us there, in some way or another.

Tsujihara pioneered the concept of day-and-date video-on-demand. He was one of the first to recognize the power and potency of social media by first selling movies on Facebook and then spearheading the acquisition of social movie fan site Flixster. His latest triumph is still a work in progress: leading the industry charge to UltraViolet, a critically important next step in the ongoing evolution of home entertainment that allows customers to acces digital versions of their purchased content from the cloud.

UltraViolet at once future proofs physical media and creates a whole new business model for electronic sellthrough, which has been a slow go for the Hollywood studios.

Many observers have already said that in choosing Tsujihara as their next CEO, Warner Bros. board members made the best choice. In truth, they made the only choice if their studio — and others like it — are to survive, and even thrive, in the digital era.