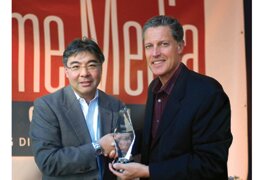 Eisuke Tsuyuzaki is one of those intriguing individuals who believes technology is like a ball of putty, to be rolled, kneaded, shaped and formed into wonderful new inventions we simply can’t live without. He’s considered the consumer electronics industry’s key point man in Hollywood, a man who is as much at ease navigating the hallways and conference rooms of the movie studios as he is dealing with his hardware peers on the East Coast and in his native Japan.

Tsuyuzaki is being honored as Home Media Magazine’s 2010 Home Entertainment Visionary for one simple reason: He’s on a plateau all by himself. The two bright spots on home entertainment’s horizon are Blu-ray Disc and 3D, and Tsuyuzaki, the chief technology officer for Panasonic Corp. of North America, is all over both of them.

While the high-definition format war was still raging, Tsuyuzaki was on the front lines of the Blu-ray army’s successful campaign for the hearts, minds and pocketbooks of consumers. He orchestrated partnerships with such studios as Walt Disney, 20th Century Fox and MGM on grand co-promotions and joint marketing efforts, including the very successful Disney Magical Blu-ray Tour, which Panasonic sponsored. After the format war ended, Tsuyuzaki turned his sights to mainstream America, staging a series of events at NASCAR races.

Not long thereafter, Tsuyuzaki moved on to the next technological marvel in Panasonic’s stable, high-definition 3D, and once again set out on the road to acquaint the masses with this new way to view entertainment at home. The Panasonic Unwrap 3D Tour hit malls in 14 cities in a two-week period right before the 2010 holiday season, showing off Panasonic’s award-winning line of HD 3D plasma TVs, Blu-ray Disc players, eyewear and various 3D digital imaging products, among them Panasonic’s first consumer 3D camcorder and the world’s first digital camera with an interchangeable 3D lens.

Tsuyuzaki also has built long and lasting ties to Hollywood’s creative community. One of the biggest feathers in his cap: helping forge Panasonic’s relationship with acclaimed director James Cameron and his 3D epic Avatar, the highest-grossing movie in history.

If the legendary showman P.T. Barnum were still alive, it’s a fair bet he would try to hire Tsuyuzaki, even though the 44-year-old executive is a lot more understated in his pitch. While Barnum employed bombast, Tsuyuzaki uses passion and sincerity — his genuine belief that first Blu-ray Disc and now 3D truly represents the future of home entertainment and is of immense benefit to the consumer.

I caught up with Tsuyuzaki recently at his favorite Japanese restaurant in Brentwood, his current home and one of three places where he now bides most of his time (the others are New York and Silicon Valley). We talked a little about the state of the home entertainment business, the future of packaged media and the advantages to consumers posed by both Blu-ray Disc and 3D. We also spoke about what he’d like to do in the future, once the consumer transition to Blu-ray Disc is complete and 3D establishes itself as a viable component of the home entertainment market.

“I’m fascinated by technology,” he says. “It truly is a wonderful word.”

Down the road, Tsuyuzaki says, he could see himself twisting and turning future technological advances toward such bigger world issues as climate change and global warming.

“The potential for technology to really change our lives, for the better, has never been greater,” Tsuyuzaki says.

And with people such as Eisuke Tsuyuzaki in the driver’s seat, I have no doubt that we’ll continue to see new and wondrous technological developments come along, developments that will enhance and improve our lives.