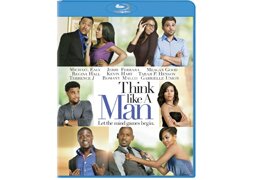 Screenwriters Keith Merryman and David A. Newman knew that adapting Steve Harvey’s bestselling book, Act Like a Lady, Think Like a Man, into a good movie meant casting a dream team of actors who could do it justice.

In Think Like a Man, four friends — “The Dreamer” (Ealy), “The Mama’s Boy” (Terrence J), “The Player” (Malco) and “The Non-committer” (Ferraro) — plot to turn the tables on their women when they discover the ladies have been using the book's relationship advice against them, creating a clever battle of the sexes.

“I knew I had the ingredients to make a classy, intelligent and really funny movie,” said director Tim Story (Barbershop, Fantastic Four). “Once I sit down with all the actors and we make sure we’re telling the same story, then, I must admit, I get out of the way. There’s so many happy mistakes and so many things that happened that you just can’t direct.”

One might lump comedian and scene-stealer Hart into that “happy mistake” category, as he supplies many of the laughs in the romantic comedy as Cedric, “The Even Happier Divorced Guy.”

“The good thing about acting is making choices,” he said. “… For me, it’s choosing a tone and sticking with that tone, as long as that tone is realistic. You can be as funny as you want to be, but you want to be believable. You want people to believe that this guy could actually exist.”

“With this kind of all-star team, it’s like having Dwight Howard or Shaq back in the day,” Story added. “You got somebody that, when it comes to being funny, you can always throw him the ball and he’ll slam dunk it. … If you ever needed a jolt, you could just go to Kevin.”

This, of course, prompted a wealth of footage that now is available in the bonus material, which includes deleted scenes and a gag reel. Exclusive to the Blu-ray are “The Guy Code,” “Men vs. Women,” “He Said, She Said” and “Comedy Behind the Scenes” featurettes.

The male co-stars said they were relieved that Hart was cast because it meant that they just simply had to act, without the pressure of being “funny.”

“I would be a fool to try to out-funny Kevin Hart in a movie,” Malco said. “… You have to be pretty secure in your job to even get to a point of working in this caliber of talent.”

For cast members like Union, Ealy and Henson, the film presented the opportunity to step out and portray stark contrasts to their typical roles.

“I normally play the girl who’s got it all figured out, and somehow can’t find a man from the right side of the tracks,” said Union, who stars as Kristen. “This is a whole different experience that so many of may friends [and I] have experienced … having different wants and needs and timetables than the person that you’re with. That was the thing that appealed to me the most, and just being able to do something different and explore different paths of relationships we don’t touch upon.”

Ealy, who has starred in some intense roles, this time around plays Dominic, the sensitive, financially challenged, top chef in the making.

“He has to be vulnerable; he has to be a good friend,” he said. “But more importantly, in terms of the path I try to drive this character, as far as the relationship is concerned, it was all about finding your muse and then being inspired by that muse, then through the pain of losing that muse, you find self-motivation.”

Throughout the film, the characters give each other dating advice — some better than others. Cast members were kind enough to give their two cents on various aspects of relationships. Here’s what they had to say:

Ferrara on picking the right mate: “What I’ve learned as I get a little bit older is people always say what they want, what they’re looking for, and I think that’s the wrong approach because that’s always going to change. What you want now is going to be different from what you want in five years. What I’ve learned from past experiences is what you don’t want. That’s something that’s not going to change.”

Hall on dating a mama’s boy: “Don’t compete. Love their mama, too, and then she’ll actually be on your side more. You can’t win.”

Terrence J on the best way to end a fight when you’re wrong: “As a man, you have to be the man, and you have to assume responsibility for your actions. That’s why this movie is so important is because it will hold a mirror up to everybody.”

Hall on the best way to end a fight when you’re wrong: “[Say] ‘I’m sorry’ – a nice, genuine apology and a meal. Men like food. Men don’t need anything grand, but a meal and affection and quiet time.”

Ferrara on couples moving in together: “Just be ready for the fact that this could end the relationship. I don’t think it’s necessarily a bad idea. I think it’s a good idea because if this is someone that you end up with, you’re going to live together at some point. … It can go either way. Stuff will change. It’s a risk.”

Union on couples moving in together: “I wouldn’t recommend it for college students. I think it’s important to have your own space and know what it’s like to be on your own, like truly on your own: financially independent, emotionally independent, before you join up. By a certain age it’s none of that “you complete me” s***. [laughs] You have to know we are two wholly formed individuals moving forward together. I need to know, do you clean the toilet? What’s your taste like? I need to know if you have an affinity for black lacquer furniture. These things you’ll never know until you share space. I think it has to come with age and maturity, and two truly independent people joining together. If one person is having to be carried, then it’s a bad situation to live with somebody because, do I get to claim you on my taxes? Because you’re a child. You’re a dependent. [laughs]”

Ealy on whether a woman should “think like a man”: “I think women should try to understand how men think, but I don’t know if we think the same way. You know what I mean? Kevin [Hart] will view life differently, and Romany [Malco] will view life differently. I think you’ve got to take every scenario as it is. And I don’t know if every man can speak on behalf of me. There are some generalities that I think are accurate, and, yes, I think there are some things that women will learn from this movie like I personally learned a couple of things from ‘Sex and the City.’ That’s kind of what we’re putting out there. Some information on how we kind of process things, and how we run decisions … through each other. You don’t always come up with stuff on your own; we go to our boys, our crew and are like, ‘So listen. This is what I’m going through. What do you think?,’ and get all kinds of bad advice. [laughs]”