Netflix Acquires 'Beasts of No Nation' for Joint Theatrical-Streaming Run 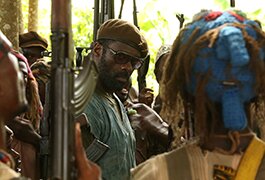 Idris Elba in new Netflix movie "Beasts of No Nation"

Netflix has again stepped into the release-window fire following the acquisition of Beasts of No Nation from Emmy-winning director Cary Fukunaga (“True Detective”) and starring Idris Elba (“Luther”). The $6 million drama filmed in Ghana about a fictitious African warlord reportedly was bought for $12 million following a bidding war.

Netflix, in a statement, said it would debut the film — about a child (newcomer Abraham Attah) inducted in a civil war of an African country — theatrically day-and-date with SVOD globally this year.

The film would require a theatrical release to be considered for the Oscars in 2016.

Yet, four major domestic theatrical chains — AMC Theatres, Regal Entertainment Group, Cinemark and Carmike Cinemas — have reportedly announced they would not screen Beasts due to its simultaneous online availability.

The policy has been in place since Netflix last year announced it was co-producing a sequel to 2000 Oscar winner Crouching Tiger, Hidden Dragon for simultaneous theatrical/streaming launch in August.

Netflix, whose chief content officer, Ted Sarandos, is a long-time critic of theatrical’s three- to four-month release window mandate, upped the ante when it announced a four-movie deal with Adam Sandler, including western comedy The Ridiculous 6.

“We’re excited to get a film like Beasts of No Nation,” CFO David Wells told analysts March 4 at the Morgan Stanley Technology, Media & Telecom confab in San Francisco. Wells said theatrical releases are part of a Netflix brand strategy that aspires to establish a global presence. At the same time, feature-length movies remain a work in progress for a business model predicated episodic programing.

“It’s still an experiment,” he said. "There are great films that are absolutely better enjoyed in a big screen and sort of that cinematic theatrical setting. But we also think there is room for films that can go direct to Netflix in terms of a distribution platform."

Separately, Netflix inked a first-look deal with Leonardo DiCaprio’s production company for a series of documentaries set to stream exclusively on the SVOD pioneer. Netflix and DiCaprio partnered on this year’s Oscar-nominated doc Virunga.