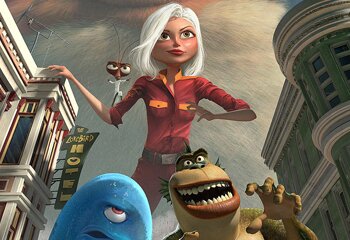 Citing box office revenue from Monsters vs. Aliens being driven largely by 3-D, one analyst has projected a 28% decline in future DVD and Blu-ray sales of the DreamWorks Animation’s release.

The analyst cited the film’s heavy emphasis on 3-D and the fact that just 31% of the movie’s opening weekend screens were 3-D, yet they generated 46% of the total audience and 56% of the box office.

Greenfield said the strong 3-D results underscored a future for the format but also emphasized that the excitement surrounding 3-D drove attendance compared to the 2-D release.

“If we are right, our concern is that the Monsters vs. Aliens DVD will struggle as in-home 3-D is not yet a reality,” Greenfield said in a research note.

He said domestic box office revenue for the film could still come close to his $186 million forecast at $174 million, but international theatrical revenues would fall to about $245 million from $297 million.

“Our key fear noted during the ‘Monsters’ screening we attended is coming to fruition, namely limited international appeal due to the U.S. focus of the film,” Greenfield wrote.