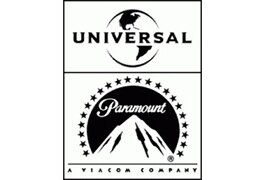 Universal will assume distribution of Paramount discs in other foreign territories over time. The agreement does not apply to domestic distribution.

Financial terms of the five-year agreement were not disclosed.

“As the home entertainment industry continues to evolve, this new partnership will create greater scale across our physical distribution business, resulting in meaningful benefits,” Peter Levinsohn, chief distribution officer of Universal Pictures, said in a statement.

The two companies already work together in several international markets, and the new agreement expands their relationship. The pact underscores ongoing changes in home entertainment, specifically the shrinking packaged-media retail market in an ecosystem increasingly focused on digital distribution.

At the same time, studios continue to derive the majority of revenue and profits from packaged media. The partnership between Paramount and Universal is as much about streamlining costs as it is realizing changing market dynamics.

“We believe this new strategic agreement will create an important opportunity for us to strengthen our international distribution business during this transformative time in the home entertainment space,” Rob Moore, vice chairman of Paramount Pictures, said in a statement.