Research: 50% of U.S. Households Have a Connected TV 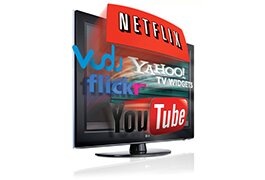 Nearly 50% of all US households have at least one television set connected to the Internet via a video game system, Blu-ray Disc player, smart TV set, and/or stand-alone device such as Roku, Apple TV, or Google Chromecast — up from 38% in 2012 and 24% in 2010, according to new data from Leichtman Research Group.

Overall, 24% of adults watch online video from via connected TVs at least weekly, compared with 13% two years ago and 5% four years ago.

Among adults watching online video via connected TV, 49% are Netflix subscribers, according to the Leichtman survey of more than 1,200 households conducted this year. About 78% of respondents who identified themselves as Netflix subscribers said they stream video on a TV set — a percentage unchanged over the past three years.

About 47% of households get Netflix, Amazon Prime Instant Video and/or Hulu Plus. On a daily basis, 31% of adults watch video on non-TV devices (including home computers, mobile phones, iPads, tablets, and eReaders), and 58% weekly — up from 18% daily, and 46% weekly two years ago. Including connected TV sets, 34% watch any over-the-top video daily, and 61% weekly.

“This recent growth was spurred by Netflix's decision in the third quarter of 2011 to focus on streaming video, coupled with the proliferation of connected TV devices, smartphones, and iPads and tablets,” principal analyst Bruce Leichtman said in a statement.