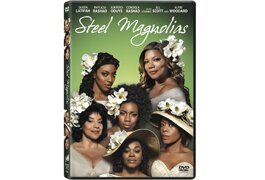 Alfre Woodard, Phylicia Rashad, Queen Latifah and Jill Scott — a virtual dream team of talented actresses. Seeing these women of color come together for Lifetime’s remake of Steel Magnolias, to me, was significant because I admire each of them.

Woodard was remarkable as the sweet, wise matriarch in The Family That Preys. Her portrayal of the sassy Southern belle Ouiser in the revamped Steel Magnolias earned her a Screen Actors Guild Award nomination for Outstanding Performance by a Female Actor in a Television Movie or Miniseries.

Rashad (Clairee) will forever be my TV mother, as I’m a HUGE fan of “The Cosby Show.” Sure, she was amazing in A Raisin in the Sun, For Colored Girls, Good Deeds and every other project she’s involved with, but seeing her as the Clair Huxtable is as good as it gets.

I’ve been rockin’ with Queen Latifah (M’Lynn) since the days of her sitcom, “Living Single.” I even named my car after her character, Khadijah, the editor and publisher of the fictional Flavor magazine.

And Scott (Truvy), the soulful Grammy Award-winning songstress, has blossomed into a wonderful actress. The way she commanded her breakout roles in Tyler Perry’s “Why Did I Get Married?” films was outstanding.

Sony Pictures Home Entertainment releases the new, all-Black version of the 1989 film, which first was a stage play, on DVD with UltraViolet May 7.

The 2012 Steel Magnolias apparently was the highest-rated movie of the year for the Lifetime network. Move over, Liz & Dick.

Admittedly, I never had the desire to watch the original film because I simply felt I couldn’t relate. Boy was I wrong.

While it was a plus seeing actresses who look like me in the film, Steel Magnolias transcends boundaries of race, age and class. It is a movie that has the ability to touch women of all kinds. It definitely spoke me, as I found myself getting misty-eyed a couple times while watching at home.

Hopefully, Sony Pictures’ release will allow a new generation and demographic to grab hold of the timeless tale of friendship, motherhood and the joys and sorrows that bind this vibrant group of women.