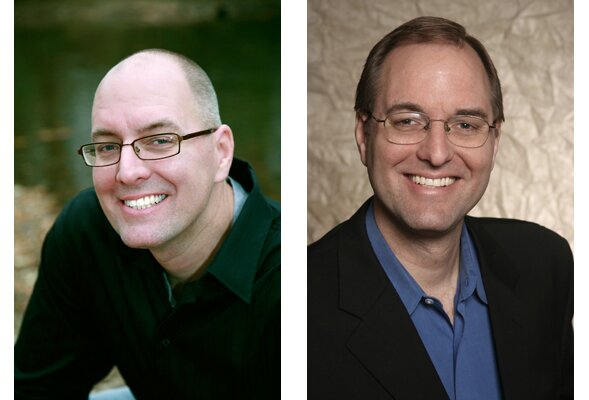 Growing up in the Bancroft household, twins Tom and Tony were competitive just like any set of brothers. But instead of wanting to be the best on the football field or basketball court, they tried to top each other with their artistic prowess.

“We just both love to draw, so that’s what we were competitive with,” said Tony Bancroft. “Just as iron sharpens iron, we improved at a faster pace because of our competitiveness.”

The brothers quickly rose up the ranks to work on the animation of numerous Disney films, such as The Rescuers Down Under, Beauty and the Beast and Aladdin. They worked closely together on The Lion King, as Tony drew warthog Pumbaa and Tom drew young Simba, collaborating on the sequence leading up to the upbeat tune “Hakuna Matata.”

They got an even closer working relationship when Tony was appointed co-director of Mulan with Barry Cook, and Tom was named supervising animator for the title character’s comical dragon companion, Mushu.

“That was the great experience as twin brothers to have our characters interact with each other, but then it was a whole different thing when it was Mulan, and now he’s my boss,” said Tom Bancroft, who is three minutes older than Tony. “… I had enough on my plate with Mushu and the challenges of making him as good as I could that I didn’t question him too much. Because he was an animator too, he knew what I was up against also. In the end, it was a very favorable relationship. We would have our lunches, where we would go off and just be brothers.”

As a first-time director, Tony said overseeing a film was a welcome — and sometimes stressful — change of pace. He and colleague Cook earned an Annie, the animation world’s answer to the Oscar, for Mulan.

“As an animator, you’re very much like an actor on a live-action film,” Tony said. “You get very involved with your character. You try to understand the ins and outs of it. … But as a director, you get to see the big picture, no pun intended. You’re involved day to day with the larger elements of the overall story, character development, and you really catch every aspect of the feature.”

The Mulan experience was equally satisfying for Tom, who considers Mushu his favorite character to work on during his more than two-decades-long career. After perfecting hundred of versions of the spunky character, voiced by comedian Eddie Murphy, Tom was able to hone in on a creature that was an integral part of the film.

“Mushu is Eddie Murphy and me combined, which is an extremely odd combination. I couldn’t be more different than Eddie Murphy,” Tom said with a laugh. “… I evolved with [Mushu] as an artist and as an animator, and was able to bring so much to it. It was a great opportunity. He’s one of those characters that as an animator, you just hope you get to work on once in your career. It’s been a real blessing to do that.”

Walt Disney Studios Home Entertainment March 12 re-releases Mulan as a two-movie collection with Mulan II. It is available as a three-disc Blu-ray Disc/DVD combo pack ($39.99), with bonus material including deleted scenes, featurettes, music videos and a commentary. A two-DVD set is listed at $29.99.

The release marks the 15th anniversary of the 1998 film about a Chinese maiden who goes undercover in the army to save her father from death and becomes a great hero in the process.

A father of three daughters, Tony said the character of Mulan makes a great role model for girls.

“We really wanted to present a different kind of Disney heroine,” he said. “Up until that point, there was Belle and Jasmine, Cinderella and Snow White. [But they] were all dependent upon their prince charming coming to save them. ... For Mulan, she was different; she didn’t really change herself as much as she changed how society views — ancient China, in this case — a woman. It was a real privilege to be able to present this new kind of Disney heroine to the world. I think that’s what really resonated with a lot of audiences.”

Mulan was also positive for youngsters in that its theme urges viewers to be true to themselves, Tony said.

“It was very important for [Mulan] not to change or be affected by those around her, to really stand up for who she was,” he said. “What I want my kids to learn from it and other generations of kids to learn from it is they can be true to who they are — their faith, their beliefs, being true to their parents and family. That’s a big part of the Mulan story; I hope that’s the legacy of the film more than anything.”

Throughout the years, the Bancroft brothers have held on to their Christian faith, even facing criticism at times for their participation in animated films that were a perceived affront to their religious beliefs.

“For every film at Disney, it was all about trying to find the thing in the film that spoke to my faith. Sometimes there where conflicts. There were a lot of faith things in Pocahontas that I didn’t agree with,” said Tom, a father of four who animated the title character. “I don’t pray to the spirit of the trees, obviously. And I would get questioned at church even: ‘How can you work on a film that’s so different from your faith?’ To me, I wasn’t telling my faith. That’s not what the film’s about. I was accurately trying to portray part of the story [about] the Indian culture at that time.

“It would be unfair to leave some of that out, and it would be even worse to include anything of mine or somebody else’s faith when it wasn’t true,” he added. “[But] never taking my eyes off my faith or the gospel of Jesus Christ being a part of my life, and how I work with others was always, hopefully, goal No. 1 in my life.”

Although the siblings no longer draw for Disney films, they continue to animate and share their faith in the process. Tony founded Christian-based Toonacious Family Entertainment in 2002, while Tom is working on a project for the Christian Broadcasting Network that focuses on Bible stories.

“Part of the reason why I left Disney was I felt a real calling that God had given me a lot of opportunities at an early age, unexpectedly, and put me in a place where I had earned a lot of experience,” Tony said. “I felt had God had given me so many opportunities in my career that it was leading toward something, to do something a little more independent.”

Added Tom, “How we show God and Christ in our lives is more of what we say and do than what we draw, obviously. You can show Christ in your life in a creative way in what you leave out rather than what you put in. Sometimes, just making a film that doesn’t have violence and sex and things like that, and also making a family film can be an uplifting experience. … But my experience at Disney was more about what we left out that I could be proud of.”