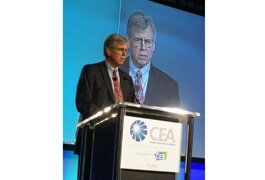 CENTURY CITY, Calif. — Chris Cookson, president of Sony Pictures Technologies, said the home entertainment industry need only look to the past and present of theaters and television to see a bright future for 4K, or Ultra HD.

“As television technology has gotten better, the movie theater has evolved as well,” Cookson said, speaking Oct. 23 during a keynote presentation at the Consumer Electronics Association’s (CEA) Industry Forum.

Stadium seating, giant screens, amazing surround sound and — important for 4K in the home — digital projection. These additions have been in response to improvements in television and the home entertainment experience, with both theatrical and home entertainment pushing each other to improve throughout the years, Cookson said.

“The next step in going from film to digital in theaters was 4K, and … in the U.S. there are more than 15,000 screens capable of 4K,” Cookson said. “And it’s natural to expect [4K in the home], with what’s gone on for the last 60 years where the television experience has mimicked what theaters have done, pushed them to go to yet another level. I think that if people are used to seeing pictures that fill up a greater level of their field of view, and see more information that’s sharper and clearer, if that’s what the theaters are offering, that’s what we can expect to see in the home.”

“Because we’ve moved on,” he said.

Cookson went through the long history of theaters and television pushing each other to do better as proof, from when movies started out black and white with a four-by-three picture on small theatrical screens.

“The VCR really changed the industry, because for the first time we started to think of television and movies as something that had to be prepared, where in the past you just took a print, loaded it on a projector and ran it for the broadcast audience,” Cookson said. “Now we were mastering things to put on cassettes and send to the home.”

Then “DVD stepped it up a bit,” Cookson said. “Because we suddenly found out that those masters we had been putting on VHS didn’t measure up. What we had to do was go back to the vault, dig out the film elements, and master again to a higher standard, and make us of the quality DVD provided.”

When HDTV arrived, all sides had to improve once again.

“When the first generation of high-def television came to market … we went back to the vault and had to pull out the film again because the standard-definition transfers we made for DVD would not stand up to high-def,” Cookson said. “When Blu-ray and 1080p came out, certainly there was no question you saw the difference. We had to go back to the vault and master it again to a new standard.”

Ultra HD sets — along with accompanying set-tops and broadcasts — will become the norm, if history is any indication, Cookson said. And everyone involved will have to step up their game once again.

“It’s reasonable to foresee that four, five years in the future … that the content we make in high-def today will never look as good [for Ultra HD]. It’s time for a rallying cry. We’ve seen the future and it’s here,” Cookson said. “What’s happening has happened before more times than they’ve made the movie Carrie.”