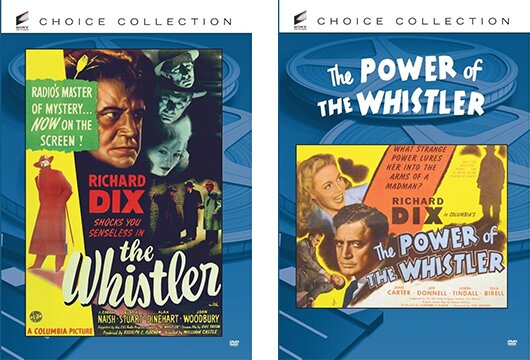 Available via Sony Choice Collection
Sony Pictures
Thriller
$20.95 DVD each
Not rated.
Stars Richard Dix.
1944-45. One of my more slothful movie-related fantasies is a desire to hang out with more Columbia B-pictures of the 1940s because the ones I do get to see from time to time — from Nine Girls to Dangerous Blondes to Night Editor and so on — always seem to reward my effort despite the large number of cheapo and culturally disreputable duds that history tells us the studio churned out.

So here we are. Said to be high on the want-list of home viewers with a yen for nooks and crannies, the "Whistler" movies as a group are probably better known to casual viewers than the aforementioned titles — or at least were at one time — due to the popularity of the source radio show. That one was mostly before my time, though I do remember the short-lived syndicated TV version from 1954-55, whose famously whistled musical theme during the credits, lifted from the radio version, creeped me out as a kid (and doesn’t do a bad job of it today). Jerry Lewis even got a good gag out of the theme in You’re Never Too Young, the very funny Martin & Lewis remake of the Billy Wilder-Charles Brackett classic The Major and the Minor.

All but the last of eight "Whistler" pics starred Richard Dix, even though he wasn’t even the one puckering his lips. That would be a mysterious male narrator located somewhere in the shadows to offer comment from his Whistler-in-the-moon vantage point; his subject was always some crime-centered pickle in which the story’s protagonist had gotten himself immersed.

Dix was an actor who remains overwrought and even risible in his best known film (the Oscar-winning Cimarron), but who was a welcome presence in just about everything else (Val Lewton’s Ghost Ship is one standout). The odd thing about Dix in the "Whistler" movies is an unusual diversification  factor. Never playing the same character, he can be sympathetic or otherwise, as evidenced by this tandem on-demand release of the first and third series entries. Marketing-wise, it sounds odd, but No. 2 (The Mark of the Whistler) is based on a Cornell Woolrich short story, which suggests a possible “rights” imbroglio; remember all the legal hell Rear Window went through in the ’70s?

In The Whistler, which runs a cool 60 minutes, respectable businessman Dix ventures into his town’s low-rent district seeking a hit man to kill him — a product of his despair over a wife thought to be dead following a seafaring accident from which he could not save her (and after rescuing others, adding to his guilt). In The Power of the Whistler, Dix is an amnesiac rescued from a pedestrian mishap by a comely young woman (Janis Carter) who has just been gotten some hints from a card-dealing fortune-teller that some strangeness may be on the horizon. Strange just by itself is her subsequent lack of judgment when it comes to Dix’s rescued “George” (the default moniker he soon goes by), but B-plotting has its own rules. The guy acts polite enough, and there are several allusions in the script to how handsome he is (a stretch). But there are hints that something is, well, unsavory about him, and Carter is pretty slow on the uptake. For one thing, animals have a way of dropping dead in his presence — even a child’s pet, which I bet is something MGM wouldn’t have let happen on L.B. Mayer’s watch.

Some of the supporting actors are fun to see here, and you can’t say they’re not economically used; the familiar-looking guy cast as a seedy dive’s low-life bartender in the original Whistler also shows up as what seems to be a straight-arrow pharmacist in the subsequent picture. Then there’s Titanic’s Gloria Stuart (obviously younger here and back in a period when she wasn’t getting a whole lot of screen work) as office assistant to both Dix and his partner in the series original, patiently pining for the former to get his head on straight about the missing wife so she can move in for some sort of romantic payoff, though you have to think she could do better.

Stuart certainly dresses up the joint just as Carter does in Power’s “nice girl” role — quite a contrast to the latter’s excitable nut job in Night Editor (that’s the one where she gets off as sexually as ‘40s censors would allow at the sight of a bludgeoned murder victim in a lover’s lane). A stunner who probably should have had a better career, Carter eventually married rich and then retired prematurely in the early ‘50s — not that many actresses not named Rita were likely to go much of any place at postwar Columbia or at RKO in the Howard Hughes era, which is where she ended her career. I bet Hughes gave her the eye, though.