Salvaje (aka The Wild One) (Blu-ray Review) 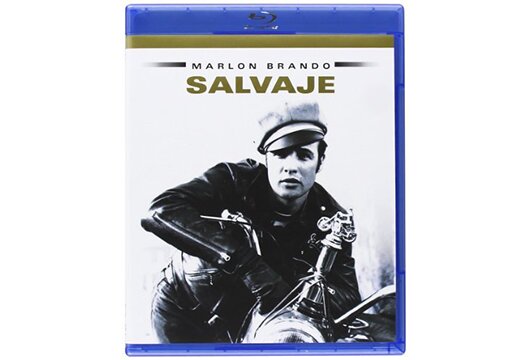 The title on the box art is Salvaje, but the Sony logo and motorcycle-garbed pic of Brando indisputably define this as the once notorious star-powered lark in which finger-snapping bikers try to convince a confused senior citizen tending bar that it’s time in life for him to make with what they refer to as “the rebop.” Invading a sleepy Podunk town inspired by Hollister, Calif., in which a not dissimilar real-life incident took place in 1947, Brando and his hipster cronies zoom in en masse on their wheels. Their apparent lot in life is to drink all the bottled beer to be had in the burg’s main eatery while keeping the joint’s jukebox in constant operation — and it’s fun to see that the platters inside are still 78s, as if it were still the Russ Columbo era.

Yes, this is 1953’s The Wild One, banned for a while in England and shown in a few venues as Hot Blood — a title Columbia Pictures would soon recycle for Nick Ray’s opus about gypsy life with Cornel Wilde and Jane Russell.

Playable on Blu-ray machines of all regions, Salvaje is merely the Wild import I chose to purchase; it could just as easily have been all-Region releases of the same trash classic under other titles from other countries — all of them from a pristine black-and-white mastering that does justice to the super-sharp photography by no-slouch Hal Mohr, who won Oscars for A Midsummer Night’s Dream (on a write-in!) and his resplendent Technicolor work for the ’43 Phantom of the Opera. I had never thought of The Wild One as a film especially marked by its cinematography, but positive Web commentary about this rendering’s clean visuals forced me to pay attention, and it’s true that on a 40-inch screen, at least, the crispness of Jay C. Flippen’s skin tones almost jumps off the screen here (not something I thought I’d ever say).

In addition to the world-famous comment Brando offers — “Whaddya got?” when someone asks his “Johnny” character what he’s rebelling against — the actor’s fashion statement is just as iconographic. In a movie released almost three full years before Gregory Peck did his early “Mad Men” sartorial note in The Man in the Gray Flannel Suit, Brando has the motorcycle jacket, the shades (at least in the opening scene) and mile-high cuffs on his jeans that give him major trouble if some Fourth of July prankster tossed a cherry bomb or M-80 into one of them. On top of this, and through a golden accident of screen history, Johnny’s chief biker nemesis turns out to be played by not-yet-star Lee Marvin back when he was still in his Missing Link stage — which gives this glorified exploitation pic a lot more historical pop than it would have had if the role had gone to, say, Jeff Morrow or John Doucette. Of course, it’s tough to perceive these guys as being truly menacing when a couple of Brando’s key sidekicks are played by crew-cut royalty Alvy Moore (later immortalized as Hank Kimball in TV’s “Green Acres”) and Gil Stratton Jr., who had just been seen and heard as Stalag 17’s stammering narrator for Billy Wilder. Put one on the other’s shoulders, and he might make an NBA ball boy.

Every movie hood or pretend-to-be-hood needs the proverbial nice-girl to tame him, and the one who can’t quite figure out how to do it here is Mary Murphy’s dishy waitress, whose miscast father is what passes for the burg’s lawman. As played by Robert Keith (real-life father of Brian, though Brian looked as if he ate more regularly), the poor guy is caught between the high volume of bikers who really aren’t committing any true crimes and the chest-beating locals clamoring for arrests as long as they don’t have to wield any clubs themselves. As for Murphy, she’s a little restless herself and would prefer a better lot in life than looking the other way when dad fails to measure up to his job or being forced by boredom to find Alvy Moore borderline exotic. Murphy’s career as a star was short-lived, though I always liked her as the negligeed slattern in the John Payne-Phil Karlson toughie Hell’s Island, which has to be the only film noir in VistaVision and Technicolor.

I grew up thinking The Wild One was a ’54 release, but Columbia gave it a New York opening on Dec. 30, 1953, which means that a few impressionable, pop-culturally progressive or anti-social Manhattan souls spent their New Year’s Eve “having a ball” — which is what Johnny and his gang cite as their life motivation. The lore is that all of the many Kramer-produced movies at Columbia lost money until the last one (The Caine Mutiny) wiped out all the red ink and then some. If this is true, then this Brando landmark of sorts wasn’t a hit (after 1952’s Viva Zapata! at Fox had failed to be a hit), which is tough to believe, given the film’s continuing status as a goofy phenomenon. But even if true, the studio had to have made lots of money back because 79-minute The Wild One subsequently got paired on double bills with On the Waterfront again and again as a kind of license to print reissue money — a hugely compatible duo because, even counting both, the full program only ran a little more than three hours. And by the way, the Brando film that immediately preceded this motorcycle spree was the Joseph Mankiewicz Julius Caesar, where re-bopportinities were limited.