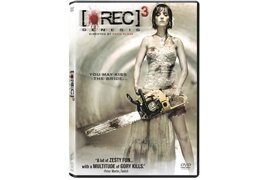 Zombies running amok are a common theme in Hollywood as witnessed by the popularity of The Evil Dead, Shaun of the Dead, Zombieland, AMC Networks’ “The Walking Dead” and next summer’s Brad Pitt starrer World War Z, among others.

So it’s not surprising Spain’s theatrical mainstay in the genre, the “[REC]” films, would switch camera angles (and locations) for the third installment (actually a prequel) of the riveting first-person POV gore franchise.

Director Paco Plaza again (without collaborator Jaume Balagueró) writes [REC] 3: Genesis from the perspective of amateur footage found in a discarded camcorder documenting the societal ritual of an out-of-control wedding. The purposely shaky video is in stark contrast to the hired videographer’s preferred  cinéma vérité.

No one really pays attention to the crazy uncle harboring a nasty dog bite to his hand — after all, aren’t uncles supposed to act slightly juvenile at a wedding?

Then again, this is no ordinary bite and the resulting virus transforms the punch-drunk uncle into a blood-spurting, ravenous flesh-eating carnivore. As anyone familiar with zombie culture knows, one nibble decrees victims to a similar fate or death. So much for the father-daughter dance.

To Clara’s credit, she’s no shrinking violet in the face of encroaching zombie bloodlust. It’s amazing what a desperate bride will do to loved ones when armed with a chainsaw. ’Til death do us part, indeed.