Only Angels Have Wings (Blu-ray Review) 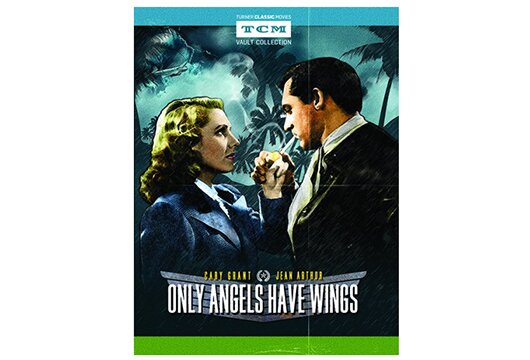 The Columbia Pictures classic library continues to get a load of Blu-ray love with the release of a restored key Howard Hawks movie — my favorite of the director’s long career aside from Red River and, as would follow, my favorite of his five films with Cary Grant. This is such a 4K looker that you can see details of the rain dripping from Grant’s hat (a kind of what-the-well-dressed-man-wears-in-South-America fashion statement). And, pretty sure, a string attached to the miniature model during one of the movie’s several planes-in-peril sequences.

Peppered by a lively Jules Furthman script, Wings replicates much of the feel of Hawks’ Ceiling Zero from 1935, another personal favorite that I’ve heard has been held up for home release over rights issues (though it used to turn up on one or more of the Turner outlets in earlier days). We and the Wings cast are situated in what appears to be something of a honky-tonk town — located in a valley below a cliff-y mountain range of steep, narrow turns that challenge the piloting skills of early aviators whose job it is to deliver mail through brutal storms and fog that only periodically clears. Grant’s character is in charge and minus much of a budget to keep planes in the air, without which the fledgling concern will lose its contract. Crack-ups, though, are getting to be the norm.

Along with Rio Bravo, this is the movie that most effectively delineates some of the key Hawks themes: a code of professional men working by their own rules — and the rare woman who earns membership into this exclusive by being both a) comely; and b) one of the guys. In her only Hawks outing, Jean Arthur is ideal for this role, a worldly-wise type who has somehow remained down-to-earth (not unlike the character Ava Gardner plays in John Ford’s Mogambo, just as the film as a whole brings to mind Ford’s underseen and almost as atypical Air Mail).

Grant, Arthur and a supporting cast of dependables (Thomas Mitchell, Allyn Joslyn, Sig Ruman) would be enough to carry most movies, but this one has a couple casting bonuses that illustrate the precarious ups-and-downs of the acting profession. In her first major screen assignment commencing a 0-to-60 screen trajectory, Rita Hayworth shows up well into the picture in a money role as the much younger wife of a newly hired veteran pilot shunned by colleagues due to the indelible blight on his resume. This pariah role goes to silent star Richard Barthelmess, who made a smoother transition to talkies than some of his colleagues yet never hit full force, other than perhaps in 1933’s Depression muckraker Heroes for Sale. Either by accident or design, the Barthelmess vocal cadences sounds at slight odds with the snappier Hawks-ian deliveries of his co-stars — yet his performance plays very well because the character is at odds with everyone outside of a wife who remains faithful to him despite having the obvious tools with which to play around. This was the actor’s last major role, and he wrapped it up altogether in 1942.

Turner Classic Movies’ website really knows how to charge, but if you love this one as much as I do, you’ll forget the price inflation once the first glistening image hits your screen. An unexpected extra is a roughly 15-minute featurette with sound designer Ben Burtt and visual effects maestro Craig Barron, both fans of the movie. You get a sense here of how the sound (excellent for its day) works with the miniature work to make rain-swept plane crashes look more convincing than they otherwise might. But this isn’t to deny the bonafide flying footage, particularly in the exciting sequence where Barthelmess has to perform a perilous mountain rescue (one of several grunt assignments that go to him as punishment). And as just about any serious film observer might guess, they come courtesy of Paul Mantz, the stunt flying legend who was killed a quarter-century later filming the wrap-up to Robert Aldrich’s The Flight of the Phoenix (a movie roughly as good as this one).

New on Disc: 'Only Angels Have Wings' and more …