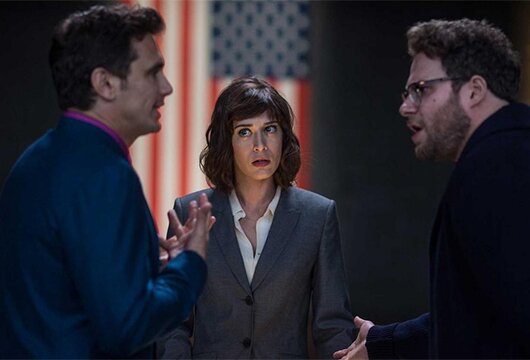 The infamous $44 million comedy from Seth Rogen and co-starring James Franco about a pair of bumbling TV producers who score an interview-turned-assassination attempt on North Korean leader Kim Jung-un has been at the center of a month-long hack against Sony Pictures.

The film, which has generated $3.3 million at the box office (through Dec. 30), in addition to about $15 million in digital retail and rental sales (a record for Sony), is also now available on DirecTV, Verizon FiOS, and Walmart’s Vudu.com. The Interview rents for $5.99 and sells for $14.99.

The cyber terrorists, who call themselves Guardians of Peace and have now reportedly threatened a major U.S. cable station, vowed harm to moviegoers earlier this month, which prompted four of the nation’s largest theater operators to scuttle a planned Christmas Day launch. Sony then worked out a Christmas Day theatrical bow with 301 indie theaters, in addition to digital sellthrough and rental access Christmas Eve on select online platforms.

The Interview is expanding to 580 indie theaters Jan. 2.

“We have always sought widest possible distribution for [the movie], and want to thank our new partners for helping us make that happen,” Michael Lynton, CEO of Sony Pictures, said in a statement.