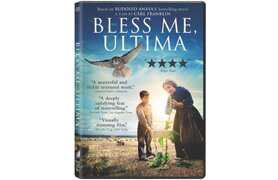 Set in New Mexico during the middle of the Second World War, Bless Me, Ultima finds young Antonio (Luke Ganalon) on the brink of several cathartic experiences that cause him to question his religious views.

When a mystical aged woman comes to live with his family, Antonio’s eyes are opened to an all-new world when he witnesses a series of petrifying events. But with Ultima (Miriam Colon) — a powerful, fearless woman who also comes off as a sweet grandmother type — by the boy’s side, he soon learns to stand tall.

Ultima and Antonio are kindred spirits. The youngster delights in receiving a wealth of knowledge from Ultima, who explains to him the importance of plant life and reveals the healing power found in nature. The elder feels a sense of duty to let Antonio carry on her legacy.

While Ultima is highly regarded among Antonio’s family, some of the villagers believe that the sage medicine woman is a bruja (a witch). One man in particular, Tenorio (Castulo Guerra), is relentless in his pursuit to destroy her, at which point Bless Me, Ultima becomes a poignant tale of good versus evil.

The coming-of-age film is filled with beautiful imagery, from the New Mexico landscape to the mighty owl that plays a greater role in Ultima’s life. The historical drama is also a wonderfully executed example of remarkable storytelling, having been adapted for the screen from Rudolfo Anaya’s novel of the same title.

Ganalon and Colon are magnetic on screen, and co-stars Joaquín Cosio, Benito Martinez, Manuel Garcia-Rulfo and little Diego Miró each add their own magic to the film. It is hard to not be moved by their performances.