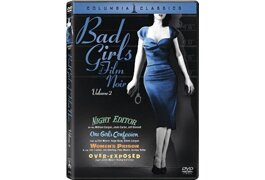 Vol. 1’s companion amounts to a Cleo Moore film festival, though the one movie here the late buxom blonde isn’t in is best of the bunch. Give its predecessor a considerable edge, but again, the price is right. And like Vol. 1, this is a fun look at what Columbia Pictures’ ‘B’-unit was doing when studio chief Harry Cohn likely had his mind much more on franchise Rita Hayworth’s personal problems.

In order of preference:

Night Editor (1946): The newsroom frame around the story doesn’t work very well, and lead William Gargan doesn’t have the sexual charisma to qualify as temptation for even a bad girl. But as the society trophy wife cheating on her much older husband, Janis Carter is the nasty real deal with the classy looks to be fully toxic. Married cop Gargan and Carter are parked in a lover’s lane when they witness the brutal murder of a young woman Carter knows. Gargan goes over to look, describes what he sees as messy, and Carter (visibly excited, almost turned on) demands to see for herself. For a ‘B,’ this is shot with mood; the first of its two co-billed cinematographers was a young Burnett Guffey who later won Oscars in black-and-white (From Here to Eternity) and color (Bonnie and Clyde). Henry Levin, a hack filmmaker if there ever was one, later directed Pat Boone’s first two movies and a pair of Dean Martin "Matt Helm" romps. He handles this one pretty competently, though.

Over-Exposed (1956): Just a year later, onetime box office underperformer Sweet Smell of Success would dive into the same milieu and become a classic. No one can make that claim here, but what a milieu — and the bean counters probably got a better return on their investment. Voluptuous Cleo Moore, the kind of woman people used to call “hippy” (referring to lower limbs, not Haight-Ashbury), barely avoids a small-town vagrancy rap by learning to become a still photographer. She graduates to shooting society mucky-mucks at a posh mob-backed New York supper club, supplying compromising photos to a scandal sheet columnist. Somehow, a rich dowager’s mambo lessons fit into all this, and so does the young Richard Crenna (as a news service reporter) back when he was trying to break away from employing that unforgettably screechy voice to play Walter Denton on TV’s "Our Miss Brooks" — the same one I always fantasized about him using in the “Rambo” movies.

Women’s Prison (1955): Mild camp value, but not enough of it, almost ties this self-explanatory potboiler with Over-Exposed — though it really is a very poor person’s Caged (on DVD, 1950), Hollywood’s greatest women’s prison movie ever. Ida Lupino’s emotionally frigid warden probably has an interesting backstory here, but the movie doesn’t give her one. It does, however, serve up almost all the expected trappings: the reform-minded doctor (Howard Duff, then married to Lupino in real life) who smokes a pipe; the matrons who like their jobs just a little too much; the obligatory casting of Jan Sterling (a trollop specialist who was also in Caged); the transparent innocent (Phyllis Thaxter) who’s in for non-alcoholic vehicular homicide; and an African-American (future Imitation of Life Oscar nominee Juanita Moore) who sings “Swing Low, Sweet Chariot” while scrubbing cellblock floors. There are a few males in the cast, including Barry Kelley (an actor who never met a corrupt authority figure he couldn’t play). But mostly, Duff has to feel like the only tarantula on the banana boat against all these females, including a self-improvement type played by good old Cleo Moore and a theatrical cut-up who does imitations of Bette Davis, Tallulah Bankhead and Lupino’s character.

One Girl’s Confession (1953): Czech-born Hugo Haas wrote, directed and starred in a series of Columbia melodramas in which he frequently played older fools done in by younger chippies. For an insight into their quality, he was sometimes referred to as “the European Ed Wood.” This one is typical, although the hash-slinger his character employs (Cleo Moore is back) has deservedly turned her venom on another before Haas even enters the picture — and the two get along all right until she takes understandable revenge when she comes to think he has stolen her money. The script finds room for some nuns and an amorous fisherman played by Glenn Langan, an actor who’d later stomp Vegas as a 50-foot-high lieutenant colonel in 1957’s The Amazing Colossal Man.

For historical reasons, I wish Sony had graced this collection with 1951’s Pickup, the movie that starred Beverly Michaels in lieu of Moore and launched the sleazy cycle of Haas’ fondly remembered (though only in culturally disreputable circles) cycle of guilty pleasures.