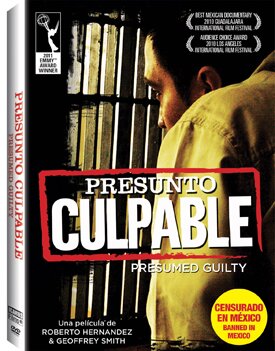 After watching Presunto Culpable (Presumed Guilty) on DVD, I was stunned, angered and sick to my stomach over the so-called justice system in Mexico. Many of us have read news articles and heard stories about the corruption down there. But never before has the curtain been drawn back on the courts like this for citizens to see firsthand.

This superb documentary captures the struggle by two attorneys fighting for the release of Toño Zúñiga, who was convicted of murder. With no physical evidence against him and a solid alibi, you’d think Toño wouldn’t have even been put on trial. But in a country where you’re presumed guilty instead of innocent, where judges are absent during 93% of the trials held and where police are incentivized to make false arrests by being rewarded for their number of arrests, Toño was screwed the moment the cops decided to pick him up for murder.

He was convicted and began serving his 20 years when he met attorneys Roberto Hernández and Layda Negrete. These two lawyers had been collecting statistics on just how bad the system is and wanted to put cameras in courts to shed light on what they uncovered. And when they learned of Toño’s case, they decided to document it on film, including his appeal for a retrial and the retrial itself.

As details are revealed — from the conditions of the dirty prisons to the police’s dirty investigation — the story becomes more and more shocking and infuriating.

Presunto Culpable has won numerous awards at festivals around the world and also an Emmy Award in 2011. Interestingly, it has been reviewed not only by entertainment critics, but also by academics, demonstrating the reaching importance of this film.

Even the Mexican courts saw its importance.

Less than two weeks after the film’s opening in Mexico Feb. 18, 2011, a prosecution witness filed a complaint, arguing he had been filmed without permission. A judge then ordered the film’s distributors, Cineopolis, to suspend all screenings. The ruling unleashed a wave of complaints and protest against censorship.

Mexico’s interior ministry and Cineopolis appealed the ruling and won, with the court recognizing that it was in the public interest for the film to be seen. The ban was lifted about a week later.

It’s no surprise that after the ban was lifted, audiences went out in droves to see the film, which became the highest-grossing documentary in Mexico after two weeks out, according to The Hollywood Reporter.

I urge everyone to see this important and well-made film on DVD, out today, from Icarus Films.