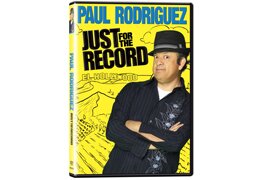 We’re nearly halfway through national Hispanic Heritage month (Sept. 15-Oct. 15), and I have yet to mention this recognition of our Latino cultura.

Thankfully, Image Entertainment gives me good cause. As most of you should know, we Latinos are pretty funny people. Image seems to know this, as the studio has a number of stand-up comedy DVDs from some popular Latinos in comedy. If you’ve been to any of our old Latino DVD Conferences, then you should remember some of these funnymen.

A brand-new DVD was added to the batch this week with the arrival of Paul Rodriguez: Just for the Record. I just watched this the other night, in preparation to interview the funnyman (he got sick and had to cancel). Now I remember as a little girl watching his first show “a.k.a. Pablo,” and I’ve seen a number of movies and stand-up shows he’s done. But this is Rodriguez’ first one-man show, and it shows a different side of Paul I had never seen. He talks about his childhood, moving from Mexico, growing up in Compton, Calif., and some of the challenges he had coming up Hollywood. In between the jokes, Rodriguez gets pretty serious and teary-eyed and even gets some digs in there against other comedians. Whether you like Rodriguez’ humor or not, you have to respect his accomplishments. Here he tells some interesting stories, and it’s worth checking out.

Image has another one from Rodriguez, Paul Rodriguez: Comedy Rehab, with a set from Rodriguez and other Latino comics. Also available are Gabriel Iglesias: Hot and Fluffy, Alex Reymundo: Red Nexican, Pablo Francisco: Ouch! Live from San Jose and Latin Palooza, hosted by Joey Medina. Check these out, por favor. These are some very funny guys.