Angelique Flores is the executive editor of Home Media Magazine. Her two home entertainment passions are Latino film and fitness. Flores has executive produced Home Media Magazine’s Latino DVD Conference and Latino DVD Awards. As a freelance journalist, her work has appeared in The Hollywood Reporter, Hispanic magazine, the Los Angeles Times, as well as other regional publications in Southern California. She is a graduate of Stanford University.

Amazon.es also has its local version of Amazon Prime. The new site’s Amazon Premium has unlimited free, guaranteed two- to three-day delivery for an annual fee of 14.95EUR  — that’s about $21. (Our stateside Amazon Prime costs $79 annually.)

The coolest thing to me (and probably my colleague John Latchem): The first product the site sold was Star Wars: The Complete Saga on Blu-ray Disc to a new Premium customer in Madrid. 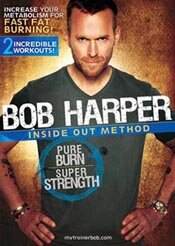 October, which is Breast Cancer Awareness Month, is almost over. And so is Anchor Bay Entertainment’s special promotion for the pink organization.

The purchase of specially marked boxes of 14 Anchor Bay fitness titles will benefit Susan G. Komen for the Cure.

These are some great workouts, some great fitness experts (I am partial to Bob and Jackie), and it’s a great cause. Let’s support it.

A Good Mexican Film … From an Aussie 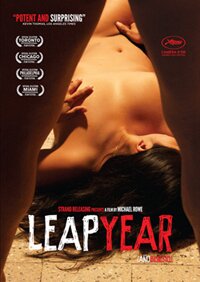 The other night I watched the gripping drama Año Bisiesto (Leap Year), just released on DVD from Strand Releasing. No doubt it was great filmmaking, but it went so much deeper than that for me.

Año Bisiesto tells the story of a young freelance journalist, Laura, who lives alone and works from home. This reminded me of my own days as a freelance journalist working at home in my PJs too, but the similarities between us ended there. Laura is an isolated woman in Mexico City, whose nightly outings end in her bringing home men who use her for the night.

Then she meets Arturo, a sensitive, aspiring actor who shows genuine interest in her and doesn’t rush out the door once he’s finished his business. Their love grows, while at the same time they develop a sadomasochistic relationship. (This reminded me of a more serious Secretary with hints of Almodóvar’s Matador.) Things take a strange and sad turn when Laura asks Arturo to take their dangerous game further to her own demise.

Don’t let the sexy box art here fool you. The sex here isn’t pretty, but it feels pretty real. The entire film felt more raw and real than much of the reality TV out there. There was no artistic photography or fancy lighting, or even any scenes outside Laura’s apartment. Yet, the film couldn’t have been more engrossing, which speaks volumes of the script, the director and the two stars, Monica del Carmen (Babel) and Gustavo Sanchez Parra (Rabia, 7 Soles, Man on Fire).

Noteworthy to me was that del Carmen isn’t tall, thin and fair-skinned. Rather, she has indigenous features, cinnamon-colored skin and some meat on her bones. And yet, she’s not a maid or a cook or a poor person. She’s a smart, working woman with issues just like anyone else — OK, her suicidal issues are probably a little more serious than most.

Also impressive was that this film — shot in Mexico in Spanish — was made by a first-time filmmaker Michael Rowe. Even more impressive to me is that Rowe is an Australian, and he gets the Mexicanness of things right. Granted, he has lived there for 16 years. But I still find it amazing when a director from one country or culture can accurately portray and infiltrate the culture of another. My pal Youssef Delara, a Persian filmmaker, deftly did that with his Latino-themed drama in ESL. And Rowe does it here.

So many times, U.S.-Latino filmmakers get ripped for using stereotypes, overdoing the struggling immigrant story and dragging the Latino genre down. And often, I agree. Why do foreigners get it better than we do? I’d love to see more Latino films like this — but made by Latinos here in the United States. For now, I’ll be looking to see what other Mexican films Rowe makes. 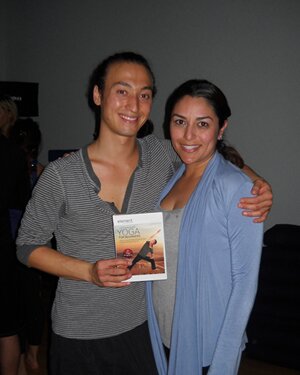 I went to one of the most unique — and probably most fulfilling — DVD release parties in my seven years at HMM.

This past Sunday night, yogi Tamal Dodge hosted the gathering for his own DVD, Element: Hatha & Flow Yoga for Beginners (Anchor Bay Entertainment), which recently was released.

The evening started with a yoga class at the Yoga Collective in Santa Monica, Calif., a studio Tamal (pictured at right) opened three years ago. He led the class, which was quite rigorous, and ended it singing his own song with what sounded like a ukele (I couldn’t see because my eyes were supposed to remain closed in meditation).

Only 26, Tamal’s been practicing yoga his entire life and teaching for 10 years. He was raised on his family’s ashram in Hawaii. He wrote and performed the songs for the DVD, which, if they’re anything like the song he sang during class, are sure to be soothing and beautiful.

I should note this was my very first yoga class. (I’m not counting the yoga DVDs I’ve done.) I also should note, I had a preconceived notion that yoga studios were these annoyingly quiet Zen-like places devoid of humor and filled with people in bright-colored spandex pants and pretty, matching bra tops with no fat to hide. And after a workout with their bodies glistening, not sweaty, they go out for a vegan sandwich and a smoothie. Meanwhile, I’m the kind of girl who shows up to a workout in old loose T-shirts and shorts. I sweat enough to lose the weight of a small baby, and afterward I go home and make myself chorizo tacos. Talk about bull in a china shop; at least, that’s what I expected.

So I found my nice black spandex pants and a decent tank top, and I was pleasantly surprised by my experience. Even though I don’t have other classes to compare to, Tamal had a soothing energy, an honest smile and a refreshing sense of humor, which is most welcome when you’re bending upside down, muscles shaking and sweat blinding your eyes (or maybe that was just me). I left relaxed and invigorated and ready to start the week.

I can’t imagine how the DVD will capture all of Tamal’s energy, but I surely plan to try it out.

ExerciseTV has recently signed a deal with four trainers who should be pretty recognizable. I’m especially excited that two of them are Latinas.

The one I’m most looking forward to seeing is Agostina Laneri, from Jackie Warner's Bravo show “Work Out.” Her new show is tentatively titled “Agostina’s Beginners Bootcamp.” I worked out with Argentinean Agostina, that is via DVD (Workout: One-on-One Training With Jackie), and I admired her physique: She has a solid hardbody yet with feminine curves. (Does anyone dislike when female fitness trainers look like boys?) Even Jackie Warner admired her healthy booty in her own DVD.

There’s also Fernanda Rocha, bringing some Latin spice to the network with her “Brazil Fit Workout” show. You might know her better from “The Real Housewives of Orange County” as Tamra’s friend and fitness instructor.

Formerly of “The Biggest Loser” is Cara Castronuova, who will host the tentatively titled “20 lb. Knockdown,” which will fuse the boxing champ’s ring skills with her “Biggest Loser” fitness training.

And there is one guy in the mix. Celebrity dance fitness instructor Benjamin Allen, who has appeared on stage with Jennifer Lopez, Jack Black and Queen Latifah, will bring his cardio dance moves to your living room.

Production began on all four projects this month, and the shows will hit in early 2012 on ExerciseTV On Demand, various streaming sites and DVD. Can’t wait!

Mexican Independence Day (Sept. 16) passed last month (also Hispanic Heritage Month). I didn’t do much to commemorate the holiday until days later. I recalled writing this story about the Televisa miniseries Gritos de Muerte Y Libertad (Vivendi), which is about Mexican independence. And with el grito (or “the yell,” synonymous with Mexican independence) just having passed, now seemed like a good time to finally watch it.

I was pretty blown away by this two-disc set that tells the story of the Mexican struggle for independence from Spain during 1808 through 1821. I learned so much about the violent and prolonged struggle as well as the country’s heroes during this time, about which I knew nothing (I am American after all). And some of this stuff resonates with what’s going on in other countries today. As a woman, I also enjoyed that it highlighted not only the men, but also several key women in the revolution.

Plus, the production is puro Mexicano — from the directors and cast to the writers, crew and historians who ensured historical accuracy. It would be hard for any Mexican to watch this and not be proud of the fighting spirit of our people as well as the talented Mexicans working in film and television today.

The DVD also features equally noteworthy extras. Historians offer interesting anecdotes about the historical figures portrayed, and a behind-the-scenes featurette explains how on-point the series was in its accurate portrayal of what historians think really happened.

Mexicanos and history buffs, don’t wait for the next dia de independencia to watch this one.

So I finally quit my gym. I had been a loyal, supportive member of the Long Beach YMCA for about eight years. There I shed more than 10 pounds (and kept it off) without even really trying. And I was happy with that until about last year.

I was trying to slim down for my best friend’s wedding, for which I was the maid of honor wearing an unforgiving floor-length silk charmeuse dress. I realized this could be my only trip down any aisle, at least before age 40, so I had to look good.

On a budget, I turned to the stacks of workout DVDs staring at me next to my TV. First it was Jay Johnson’s Boot Camp Fitness Series (eOne) that got me to shed those initial near 10 pounds. But once I got through that nine-disc set, I needed to maintain my new size. I looked to Bob Harper (Pure Burn Super Strength, Anchor Bay). Then Jari Love (Get Extremely Ripped!), then Jackie Warner (One-on-One Training, Anchor Bay), and, of course, the queen herself, Jillian Michaels (30 Day Shred and Yoga Meltdown, Lionsgate).

Almost a year later, I’ve managed to keep most of the weight off and found that I had been working out more at home than at the gym I was still paying for monthly. So I quit. And every month, I get a new amazing trainer that gets me recharged — for about half the cost of my gym membership.

Welcome to The Skinny Burrito, where you can read my musings about my two passions in home entertainment: the Latino and health/fitness markets. Sounds like two totally different arenas, but not for this health-conscious Latina. Bob Harper gets my heart pumping as much as Andy Garcia does — just in different ways. So come back if you want to read about which workout DVDs are helping me keep my curvas, or if you want to learn more about the wonderful, yet often not mainstream, Latino films out there. And there’ll be much, much more to come.