Boys From Brazil, The (Blu-ray Review) 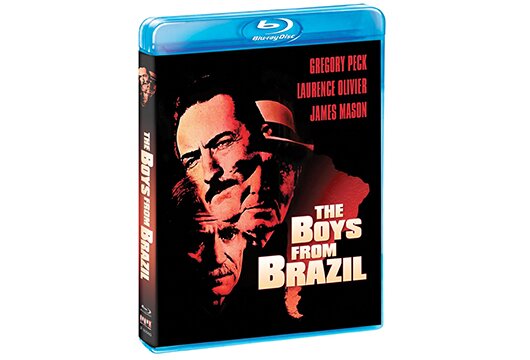 The only movie, pretty sure, to claim both Laurence Olivier and Police Academy’s Steve (billed as Steven) Guttenberg in its cast, this one’s about as preposterously trashy as it’s possible to be and still be worth a look. Adapted from an Ira Leven novel, it points up the difference between a real screen artist (Roman Polanski, who directed the all-timer of Leven’s Rosemary’s Baby) and a glorified craftsman (Patton or not) like Franklin J. Schaffner, who took a staunch crack at the off-the-wall premise here, one at least as demented as Rosie’s. Trouble is, anyone who wants to specify Brazil’s outlandish goings-on will be inevitably pegged as a spoiler — though, really now, doesn’t there needs to be a statute of limitations when it comes to divulging plot twists in a not obscure large-scale movie of nearly 37 years’ vintage that was based on a best-seller in the first place?

Gregory Peck plays the unfathomably queasy Nazi butcher Dr. Josef Mengele, who was actually still alive (though only for a few months longer) when the movie was released. The story opens in late-1970s Paraguay amid a reunion of aging SS hacks, and even in this crowd, Mengele is portrayed as something of an unbridled cowboy whose lack of control worries a band of fellow creeps who are clearly up to something. Eventually involved in their pursuit is a famed Nazi hunter (Olivier) now carving out a hand-to-mouth existence along with a loyal sister (Lilli Palmer) who struggles to organize Nazi-whereabout files whose disarray quotient isn’t helped any by the leaky roof directly above where they sit. Eventually, the story’s two principals meet up, but not until a wild final scene featuring canine co-stars (their performances no less broad).

In this case, one can probably argue that broad acting doesn’t matter in a yarn whose underlying flaw is its dumbfounding unwillingness to acknowledge all the sociopolitical planets that had to align in a very specific way to engender Hitler’s ascension to power in the first place. So with that little matter tossed to the winds, it’s hardly unfitting that there’s a tendency for both actors to camp it up. To this end, I have to say that I’ve never seen Peck enjoying himself so much on screen as he seems to be here (my two favorite Peck performances are in Twelve O’Clock High and The Gunfighter, but this one is right up there). Olivier, also full-octane, got his final Oscar nomination, and if you compare this to his performances in, say, Richard III, The Entertainer or the William Wyler Carrie (his best ever on screen, I think), his enormous range on film is further affirmed. Amid this company, James Mason (as a Mengele colleague) plays it straight, which was a good move.

The Blu-ray isn’t showcase material but looks better than decent, though I do think this movie has the only overbearing Jerry Goldsmith score I can recall. One historical oddity that adds something to the fun is the fact that just around this time, both leads played Gen. Douglas MacArthur — Peck dully in MacArthur and Olivier with gusto in the otherwise god-awful Inchon. Actually, I love the latter’s much panned but essentially accurate performance in Inchon playing one of the century’s consummate egomaniacs — though if you think he’s pushing it near or over the top in Brazil, look out if you can ever find a way to score a copy of that once notorious Korean War fiasco.

New on Disc: 'The Boys From Brazil' and more …