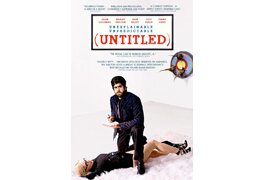 Two brothers, Adrian and Josh (Adam Goldberg and Eion Bailey, respectively), are artists of very different calibers. Adrian writes deliberately obtuse avant-garde music in which his percussionist kicks a bucket (literally, not figuratively) and his clarinetist moans and squeals through her instrument while he pounds on the keys, while Josh makes visually appealing abstract paintings a client wants to buy in bulk for doctor’s offices. Josh takes gallery curator Madeleine (Marley Shelton) to see Adrian play, and she sees something in the difficult artist that even his own family doesn’t.

(Untitled) is rife with caricature that tempers its satire of the contemporary art world. Its points about how valuation of art (of any variety) depends on how just a handful of people see it and how quickly art can fall in and out of favor are valid and pose interesting questions. In this sense, Shelton’s Madeleine, who sees past the snickers and senses real genius in Adrian, seems the most believable character, leather skirt and all. But other characters, including the warring brothers’ flat personas, as well as the clarinetist and a young investor interested in art collection, both of whom stare at contemporary art pieces with confusion and disbelief (why would either of them bother taking part in the art world to begin with?), seem at best dubious and at worst mean-spirited.

(Untitled) might appeal to anyone who enjoys poking fun at the art world or who enjoys seeing it represented in film, but its jokes about how silly contemporary art can seem to the working world might work better were they more fully formed.