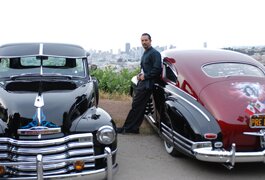 The independent drama La Mission stars Benjamin as a working-class Chicano, Che, who lives in San Francisco’s Mission district with his son, Jes. The macho Che is shaken up when he finds out his son is gay.

As a coming-out film told from the view of the parent, the movie shows both the societal and cultural struggles gay Latinos can face, along with a number of other social issues along the way. The film marks the second movie that the Bratt brothers have made together (the first was the 1996 drama Follow Me Home).

“We’ve been working since we were 5 or 6 years old, knocking on doors, pulling weeds, cleaning yards,” Peter said. “This was the ultimate playground.”

With a strong social conscience, the Bratts addressed social issues not only in the film’s plotline, but also behind the scenes.

Among the initiatives was a partnership with BAYCAT (Bayview Hunter’s Point Center for Arts and Technology), a San Francisco-based non-profit center that educates, empowers and employs underserved young people and adults in the digital media arts. BAYCAT youth were hired to produce, direct and edit behind-the-scenes material.

The brothers also committed to a green set, hiring  a green consultant to assist in such strategies as recycling, reusing and waste management.

“We try to apply a lot of the Native teachings that our spiritual elders talk to about,” Peter said. “One of those is being good stewards to mother earth.”

The Bratts’ strong sense of their Native pride comes from their Peruvian ancestry.

“We celebrate the indigenous,” Benjamin said of his sense of being a Chicano, a person usually of Mexican-American background but with a political consciousness and a recognition of indigenous roots. “We are Chicano to the bone.”

While decidedly a Latino film based in a Latino neighborhood, La Mission has sparked some controversy on the Internet within the Latino community for it’s portrayal of a gay Mexican-American man.

“We don’t take any of those comments down,” Benjamin said. “We want to create a piece of work not only to entertain, but to provoke discussion.”

Certainly, the Bratts have seen that the film speaks to more than the Latino and gay communities.

Teachers for Social Justice in the Bay Area drew a curriculum around the film, he said. Such groups as Native groups, sobriety houses, LGBT groups and churches have organized group screenings or used the film as a springboard for discussions. Activists Cornel West and Dolores Huerta also have shown support of the film and the issues it addresses, Peter said.

La Mission’s revenue has surpassed the $1 million mark during its limited theatrical release — and is still growing — supported mostly by word-of-mouth. Filmmakers hope the movie finds a wider audience on DVD. One of the greatest compliments for the brothers, they said, was from an audience member who said that when the DVD comes out it’s going on the shelf with other Latino classics such as Mi Familia, La Bamba and Blood In Blood Out.

“This film is going to have a lasting place among these cultural favorites,” Benjamin said.