Technicolor Ready for Influx of 4K in the Home 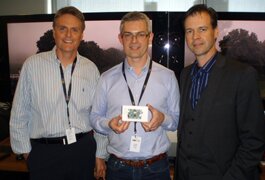 HOLLYWOOD, Calif. — With more and more 4K content on the way to the home, Technicolor is working with semiconductor company Marseille Networks to make sure consumers can see the screen resolution of 3840x2160, four times the resolution of current HDTVs.

“We’ve always been super diligent working with the studios,” said Doug DeLor, head of global branding for Technicolor. “Now we’re taking what the artists intended for the home.”

“We’ve been working on 4K for a long time,” said Jim Fox, senior director of product marketing for Marseille Networks, the first semiconductor company to complete Technicolor’s new 4K certification program, first launched in late June. “We knew it was going to be a while before there was broad availability of 4K content. But it’s happening, and not just TV, but everywhere.”

The certification ensures that a 4K source device will deliver a 4K Hollywood movie experience in the home from existing HD content. Many Hollywood titles are produced in 4K, but delivered in a lower resolution. The challenge for Technicolor and Marseille is to transform the legacy content into 4K content for the new generation of 4K TVs.

“One of the key things is to never harm the video,” Fox said of the certification program. “The message to consumers is that if you see the 4K certification, you’re going to have a better experience.”