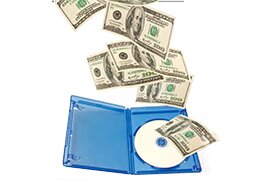 When Top Hat Video first opened in Bountiful, Utah, in 1983, it was the 13th video store to open in the greater area just north of Salt Lake City.

Today it’s the only one left.

Late last year, students at nearby Brigham Young University (BYU) set out to find out what Top Hat Video was doing right, and its survey and data results could be something worth paying attention to, if you own one of the dwindling number of video stores that remain in business.

Regular Top Hat customers (54% of the store’s customers visit Top Hat two to three times per month or more) were increasingly renting Blu-ray over DVD, even at a premium, and almost every single Blu-ray of a new-release title was checked out more often than its DVD counterpart.

While 57.5% of Top Hat customers said they also use Redbox, Top Hat, as do all video stores, has an advantage with many new release titles, which aren’t available at Redbox until four weeks later. The store had an advantage over Netflix as well. While 46.8% of Top Hat customers said they use Netflix, the lack of new-release titles there also drove them to the video store. Blu-ray versions of Man of Steel, This Is the End and World War Z were all checked out more often than DVD.

A full third of Top Hat customers said they preferred either Blu-ray or Blu-ray combo packs, something the report made note of: “Blu-ray/DVD combo packs allow Top Hat to meet demand for both formats while receiving the higher revenue from the Blu-ray price.”

Ted Engen, president of the Video Buyers Group, a consortium of independent video stores across the nation, said many video stores are noticing the Blu-ray trend, as more and more people bring Blu-ray players into their homes. DEG: The Digital Entertainment Group estimates that at the end of 2013, 72 million U.S. homes had a Blu-ray player.

“We have seen [the video store business] stabilize somewhat with a lot fewer store closures happening,” he said. “We do know Family Video is actually expanding with some 50 new stores here in the Midwest. Most video retailers are doing really well — some surprisingly well. They tend to make the experiences special every time customers come into the store.

“Blu-ray is making a real positive impact on video retailers. They can and do charge higher rental fees and the consumer demand has grown, 40%-plus for many retailers.”

Ross Flint, owner of Video Station Superstore in Taylor, Texas, said Blu-ray is helping his store hold off extinction, even with five Redbox kiosks in the community of 16,000.

“Blu-ray has done well, and it’s been pretty easy to get people to upgrade,” he said. He also noted that getting new releases ahead of Redbox and having a much bigger selection is keeping customers coming back.

Matt Lynch, marketing coordinator for Seattle’s Scarecrow Video (which bills itself as the largest indie video store in the world, with 125,000 titles for rent), also said Blu-ray demand is up. Still, the trend won’t bring video stores back to anything remotely resembling their heyday, he said.

“Things aren’t great right now because people think they can get everything they want through streaming services, which is wildly untrue,” he said. “Netflix can cut sweetheart deals with the studios, but we can offer the selection that they can’t. And while Netflix has an algorithm that guesses at what you might like, we have knowledgeable people.” And Redbox has even fewer titles to offer, he said.

Tom Ivison, owner of Classic Video in Kingston, Ontario, Canada, agreed that selection is an important advantage — his store has more than 50,000 discs — but that “after 27 years of owning and operating a brick-and-mortar video store, it comes down to the basics: selection, service and convenience.”

His business is still “vibrant” despite the decline of video rental stores as digital delivery has grown, he said.

“There is still room for video stores and people wanting to leave their home for entertainment,” he said. “People still like to socialize, meet family, neighbors, friends, or meet new acquaintances, which still happens at video stores.”

Miguel Gomez, owner of Viva Video! in Philadelphia said he’s seen a lot of once-regular customers disappear, but not enough to force him to close up shop.

“Many come back once they've tired of watching TV shows and want to watch a good movie, not just whatever has the cheapest streaming rights,” he said. “What I think is most important is just getting the word out, and keeping it out there that your particular town still has a video store.

“As there are fewer and fewer of us, people are less likely to look for one when they move to a new town, so trying to remain as visible as possible in the local community is key, whether this be by advertising, club sponsorships, film screenings, etc.”

David Chamberlin, owner of Video Plus & Celebrity Tan in Rice Lake, Wis., said much of a video store’s success today rests on the quality of the product itself.

“It’s so dependent on the quality of the releases,” he said.

He said much of the content out on disc in 2013 — other than toward the end of the year — wasn’t up to snuff, hurting traffic for his store. And as for Blu-ray, he’s not seeing the same consumer embracement.

“Our customers fought like crazy not to give up VHS, and we’re seeing the same response to the jump from DVD to Blu-ray,” Chamberlin said.

Russ Crupnick, longtime entertainment industry analyst with The NPD Group, now managing partner of research firm MusicWatch, said video stores may eventually be gone for good, but their demise is still years away.

“You’re likely to have urban stores that cater to a specific discerning customer who wants unique movies or genres you can’t find online or at a kiosk,” he said. “And they can offer other experiences that a kiosk or digital service can’t. Heck, there are still CD stores who attract the super fans.

“The trip to the video store may no longer be the norm for the average suburbanite in a big metro area, but there’s enough left for a small niche.”