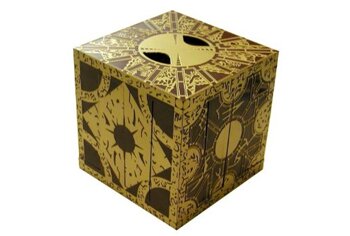 “Horror’s a really personal genre, and what’s unique about these awards is that the fans had their say,” said The Devil’s Rejects actor Sid Haig. “The people who spend all this time working on DVDs often go unrecognized, and I hope the Reaper Awards gets bigger.”

The first ever Reaper Awards honored the best horror-themed DVDs and Blu-ray Discs released between Sept. 1, 2008, and Aug. 31, 2009. A panel of judges selected nominees from a pool of studio submissions, with winners determined by an online vote held in September. Winning titles were honored with a Grimmy, a hand-painted statuette resembling the Grim Reaper.

The Hellraiser boxed set earned two Grimmys, for Best in Show and Best Packaging. The set came in a gold box fashioned after the Lament Configuration box from the films, and included the 20th anniversary DVDs of the first two films and the Blu-ray of the first film. The Blu-ray version of the first film also won for Best Remastering.

Sony Pictures won for Best Blu-ray for its Ghostbusters 25th anniversary re-release; Best Vampire/Werewolf film award for Underworld: Rise of the Lycans; Best Zombie film award for Quarantine; and Best Indie/Foreign for [REC], the Spanish film upon which Quarantine is based.

Best Theatrical went to Universal Studios Home Entertainment’s The Last House on the Left, a remake of a 1972 Wes Craven film.

The original Last House earned 20th Century Fox Home Entertainment and MGM a Grimmy for Best Slasher. A tie in that category also yielded a Grimmy to Anchor Bay’s direct-to-video film Laid to Rest, which introduced a new horror villain to the genre: ChromeSkull.

“The fact we beat Jason is truly special to me,” said actor Nick Principe, who played Chrome Skull.

Director and producer Mick Garris said the awards could expand in the future to include even more sub-genres. “Home video is the drive-in of the new generation,” he said. “These horror films can’t be pigeonholed in the studio coop, and hopefully these awards will bring attention to these movies.”