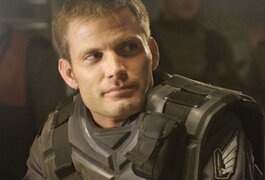 Sony Pictures Home Entertainment is teaming up with the Web site Brickfish to promote the Aug. 5 DVD and Blu-ray Disc releases of Starship Troopers 3: Marauder.

Brickfish, whose users contribute to professional marketing campaigns in contests, has launched a “Create a Starship Troopers 3 PSA” campaign, where contestants can make a video or poster promoting the film and asking people to join the fight against the invading bug menace featured in the franchise.

The winner will receive combat gear from the movie, the trilogy on DVD, $250 in cash or a scholarship, and star Casper Van Dien will record a 30-second audio track for the winner's cell phone.