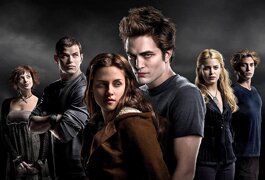 The film joins Pirates of the Caribbean: At World's End, The Dark Knight, Harry Potter and the Order of the Phoenix and Transformers as top-selling first-day home entertainment releases.

“We are incredibly appreciative that Twilight fans came out to once again support this film at our midnight events across the nation,” said Steve Nickerson, president of Summit Home Entertainment, in a statement. “With such successful first-day sales, it is apparent that our fans remain passionate about the 'Twilight' saga and want to own a piece of the Edward and Bella story they have come to love."

Across the country nearly 6,000 retailers, big and small, kept their doors open late for one of the most hotly anticipated DVD releases in recent memory. Home Media Research pegs Twilight as the top seller and rental for the week, even with only two days on store shelves. Wal-Mart — the nation’s No. 1 DVD retailer — said Twilight was the most pre-ordered DVD in its history.

Fans Line Up for 'Twilight'