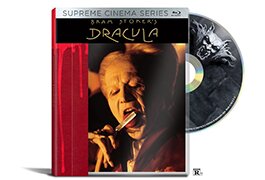 The new edition of Dracula will include a 4K restoration with Dolby Atmos audio, and new interviews with Coppola and his son, Roman, who was the visual effects director. The disc also includes deleted scenes, featurettes from previous disc releases, and the original 1993 commentary with the Coppolas and makeup supervisor Greg Cannom.

The Supreme version includes a 24-page booklet of rare photos and behind-the-scenes information. The film will also be available in more-conventional Blu-ray packaging without the booklet.