‘Intruders’ Creeps Into Your Fears 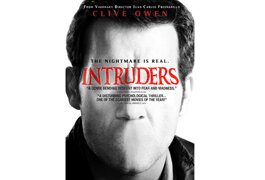 As a child, no one ever gets told all the dark family secrets and problems. Parents try to shelter their kids as much as possible, for their own good. But left to fill in the blanks with their own imagination often leads to more trouble. This is the concept Juan Carlos Fresnadillo, director of Intruders, tries to capture in his psychological thriller.

The spark that began Fresnadillo’s interest in Intruders arose from his childhood experiences.

“I remember when I was a kid, and I noticed that there were some secrets that my parents didn’t tell me about my family,” Fresnadillo said. “… It’s those words that you don’t hear that are amplifying your fantasy, and then you can turn those secrets into some kind of nightmare or monsters like the movie.”

Intruders highlights the lives of two children who are having recurring nightmares of a faceless man known as Hollowface. What creates more intrigue is what appears to be the lack of a connection between the children. Juan (Izán Corchero) lives in Madrid, Spain, with his mother, and Mia (Ella Purnell) lives in London with her parents. As the parents try desperately to save their children, they realize they too have to face their own demons in order to bring an end to the nightmare.

The frustration of being kept in the dark as a child encouraged Fresnadillo to explore the origin of fear in the film. Intruders investigates the anxiety that comes from “the things that you don’t know, from the secrets that you want to know, from those words that nobody tells you,” he said.
The movie is an example of how secrets kept as a child manifest over time and become an intrusion into your life.

Having actors such as Clive Owen, Carice Van Houten, Pilar Lopez de Ayala and Daniel Bruhl on set was a fascinating and rich experience, Fresnadillo said, because they’re a diverse group of people. Their differences served a greater element to the story.

“It was so special to combine all these different origins and nationalities because for me this movie was an exploration about some kind of universal fear,” Fresnadillo said.

However, working with children did have its difficulties. The toughest concept to portray in the film was ensuring the kids in the film depict real and intense fear without really upsetting them.

“One of the main things when you’re dealing with kids is you have to take care about what you are doing to them,” Fresnadillo said. “You don’t want to traumatize them. But at the same time you sometimes have to push them in order to create that reality.”

One of the important elements in the movie was the idea of a dual structure. To work in that structure with two different countries and two different families was part of Fresnadillo’s initial vision because one of the main ideas the movie is conveying that no matter how far you travel or change in your life there is some things that you can’t run away from.

“There are some monsters that are traveling with you,” he said.

Fresnadillo, who has directed several other thrillers, such as 28 Weeks Later, said a common theme in his movies is a hero dealing with a supernatural being and how that supernatural side is a reflection of a very human problem that hero is feeling. The same internal human problem is present in Intruders, where he creates just the right amount of intrigue and mystery needed to keep the audience hooked.

The idea behind a faceless monster was to create a universal fear and engage the audience.

“I think it puts you as an audience in the rollercoaster of the story, and you want to see the face of the monster,” Fresnadillo said.

About the Author: Maribel Castañeda