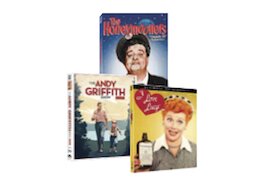 LOS ANGELES — In a dark series of rooms on the second floor of a quiet building at CBS Television City, a years-long labor of love is being undertaken. And the first results of that work are about to be seen by the public.

On May 6, CBS Home Entertainment and Paramount Home Media Distribution release I Love Lucy: Ultimate Season One, The Andy Griffith Show: Season One and The Honeymooners: ‘Classic 39’ Episodes on Blu-ray Disc for the first time, with every frame of every episode transferred in high-def from the original camera negative.

“You can now see the comb-marks in Ricky’s hair,” said Ryan Adams, director of multimedia services for CBS Television Distribution, while showing off before and after clips of “I Love Lucy.” Looking at “The Andy Griffith Show,” Adams pointed to the blown-out whites and crushed blacks of the original film version. Now you can see lines in beards.”

Full color correction, updated audio, dot-by-dot cleanup of every frame. There are three to six reels per episode of these older shows, and transferring just one takes about six hours each. One 25- to 30-episode season takes about four months to get ready for Blu-ray.

“In high-def you can start to see the intricacy of their performances,” Adams said. “The lines on a face tell a story. After so many years of these standard-definition tapes in circulation, you forget how good these shows actually looked.”

“When we’re allowed to go back to that film, it’s a treat for us,” he added. “We try to establish a look, without forcing it away from how it was filmed to begin with. The fans will let us know if we get it wrong.”

“The more these shows are well-received on Blu-ray, the more shows we can come through and work on,” Adams said.

David Grant, VP of multimedia for CBS Television Distribution, said that the equipment to clean up these classic series only arrived in the last few years, and the decision to update them was made based on the fan base.

“People want to see the cleanest, sharpest picture possible,” Grant said. “If they could have done this back then, they would have. It’s got to be the best they can be.”

Besides the incredible picture, each set includes an array of bonus features, many being included on disc for the first time.

“The Honeymooners” set includes promos, a “Best Buick Yet” presentation, a “60 Minutes” Jackie Gleason profile and outtakes from 1984, 35th and 50th anniversary specials, and more.

And “The Andy Griffith Show” set includes on-set home movies, original sponsor shots from select episodes, the “Return to Mayberry” TV movie, an interview with Griffith and “Danny Meets Andy Griffith” from the seventh season of “The Danny Thomas Show.”