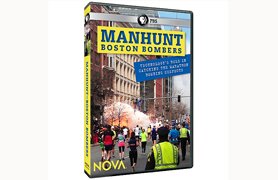 Future documentaries will, of course, warn of surveillance-spurred privacy abuses or chronicle those that have already occurred. But for now, this Boston-bombing springboard exists as a much more positive head-shaker in the manner it shows us the degree of technological wizardry governments already have at their disposal for tracking down criminals, including (as here) some unequivocal human slugs.

Make no mistake: there’s plenty of on-the-scene footage on prominent display, including what you’d expect to see here from the April 15 explosion during the city’s Marathon and the immediate street aftermath of a tragedy that killed three people and injured more than 250 others. There is, in addition, some vintage Warner Bros.-caliber tape of the April 18 Watertown, Mass., police shootout with the two suspects on the Thursday after Monday’s pressure-cooker detonation. Plus helicopter shots of suspect Dzhokhar Tsarnaev (or at least his outline) when he was hiding in an ordinary citizen’s backyard boat, positioning that led to his arrest shortly thereafter a mere four days after the original incident.

But more of this documentary is devoted to how the technology works. This might be footage of explosion experiments out in one of those remote desert hellholes that looks like the A-bomb test area where John Wayne and other subsequent cancer victims shot The Conqueror — or a demonstration of software that’s able to transform an off-angle photo of a suspect (say, one where he’s looking off to his side) into a direct looking-at-you image that’s needed to make a more positive i.d.

The first time I saw the movies deal with advanced surveillance satellites was in one of the few Tony Scott movies I can abide — 1998’s Enemy of the State — and I remember feeling kind of dumbstruck. I had a similar feeling hearing one of the savvier cable pundits predict on either the Wednesday or Thursday after the Boston bombing that authorities would probably identify the suspects within 24 hours, which certainly turned out to be true even though the suspect photos released to the public were something less than pinpoint.

These are not, however, our grandfather’s crime-busters or even our father’s. The single most amazing shown here may be a demonstration of New York City’s “Domain Awareness” program (NYC is to date the only place in the U.S. to have it) that displays practically everything occurring outdoors in the city — in real time. As we all know by now, cameras are just about everywhere in current society: department stores, theaters, fast-food places, toll booths, you name it. The fruits of all this get beamed into New York City’s spy-central headquarters, which boasts an array of screens that make, say, Dr. Strangelove’s War Room look like an efficiency apartment where two guys in 1948 could be watching some roller derby on a 7-inch Crosley. You want to get a shot of everyone near the New York Stock Exchange — right now — who’s wearing red? Presto, here they are, and in about as much time it takes someone in a midtown deli kitchen to place an extra giant pickle on your plate.

All this makes you wonder what the next century will like technologically when the movies themselves haven’t even yet made to it the century mark since the release of The Birth of a Nation. Tune in tomorrow, though truth to tell, someone else will be tuning in for you – with more great (but at times, possibly less desirable) results.