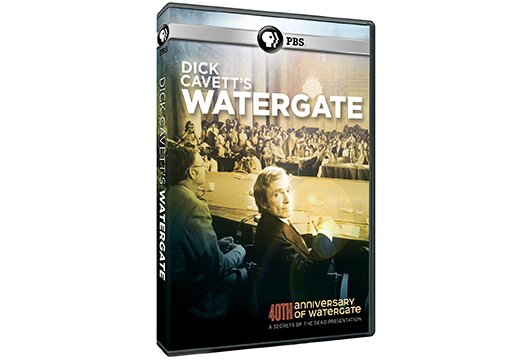 Dick Cavett has enjoyed solid success with Shout! Factory by plumbing his archives for a series of his interviews with movie directors, rock stars, comedians (the Bob Hope and Carol Burnett evenings are as good as it gets), and acting immortals (Katharine Hepburn rearranged Cavett’s set on camera before she’d deign to sit). But when I think about the Cavett junkie I was during these counter-culture years, the political shows are the ones I constantly dredge up in my mind. These would include the one with lefty journalist I.F. Stone (first time I ever saw him) sharing the stage with Dustin Hoffman — plus an entire program devoted to Daniel Ellsberg after he helped make the Pentagon Papers public (if memory serves, Barry Goldwater burned a few of his gaskets over this particular telecast).

The Papers leak was one of the events that led indirectly to Watergate, and just about the only non-news show that would touch the subject during this period was the one hosted by the only Johnny Carson rival who managed to carve out an equally vital late-night niche of his own. As luck would have it, “The Dick Cavett Show” welcomed Teddy Kennedy as a guest early in the very first week following the Nixon Plumbers’ break-in of the Democratic headquarters in Washington, D.C.’s Watergate building, right around the corner from where I would eventually work. The senator, seen here from the show, doesn’t have much to offer by way of illumination, though he must have had his suspicions. Not long after, we see Attorney General Richard Kleindienst telling Cavett how unprecedentedly extensive the immediate in-house Watergate investigation had just been when he knew a whole lot more that was going on (he later pleaded guilty for failing to testify fully during some early Senate Watergate sleuthing). Kleindienst’s eventual 1973 resignation set off what seemed like a litany of Nixon a.g.’s during what remained of the president’s administration. If memory serves, there was a major movie of the day — I think it was Paul Mazursky’s Harry and Tonto with Art Carney’s Oscar-winning performance — in which Carney’s Harry character wanted to know who was “attorney general this week.”

This pressure-packed remembrance is hosted by today’s version of Cavett, assisted by star Washington Post reporters Bob Woodward and Carl Bernstein, former White House counsel and eventual beans-spiller John Dean, former Nixon Library historian Timothy Naftali (this guy is the final word in historical context) and more. Cavett more than holds his own in this company because, for one thing, he was “on the tapes.” A high point here is hearing Nixon (with associates) discussing the show, wondering if Cavett was Jewish and then asking his team if they could “screw him.” To this last point, Cavett notes that four members of his staff had to endure tax audits, which would be way beyond the statistical norm.

A couple of the biggest laughs here come courtesy of the Senate Watergate Hearings — one from the broadcast where Chairman Sen. Sam Ervin gives White House aide John Ehrlichman such a dressing-down that even Ehrlichman had to laugh, and another where Cavett interviews Sen. Howard Baker in the hearing room, and the latter gets off a terrific wisecrack in response to a jokey Cavett statement. The biggest new revelation comes near the end: when Woodward and Bernstein (who calls Gerald Ford “great”) tell of their personal 180 about subsequent President Ford’s Nixon pardon, which is a good a reason as any why Ford lost the ’76 election. I myself long ago came to the strong (if sigh-heavy) conclusion that Ford was right to do it when any imprisonment appeals process would have eaten two to six years. But I was really floored to hear them say it. Something not a surprise here is how much glee frequent Cavett guest Gore Vidal displays over the onetime spectator sport of watching Nixon flail in office as the sharks ascended. Hopefully, Cavett will someday make available his famous showdown show between Vidal and Norman Mailer (also New Yorker Paris correspondent Janet Flanner) because it was an all-timer that those who saw it will ever forget.