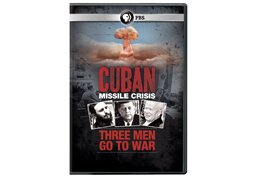 The least significant of the three men in this whistle-wetting “anniversary” documentary is, of course, the pesky gnat who still outlives JFK and Soviet Premier Nikita Khrushchev, the two who literally held the fate of the world in their hands during those fateful two weeks in October 1962. But Cuba’s Fidel Castro deserves co-billing because he was, until the end, a key player in the showdown (whose yard was it, anyway?). He even engaged Khrushchev in a debate about whether Soviet-backed missile bases on the island should be constructed in the open (the former’s preference) or simply handed to the U.S. as a fait accompli upon their eventual discovery (which is what happened).

Covering many of the same events dramatized in director Roger Donaldson’s underrated Kevin Costner starrer Thirteen Days (2000), Crisis is enough of an insider’s account to add a little juice to a well-chronicled story. Employed are a 2010 interview with Kennedy advisor/speechwriter Ted Sorenson not long before his death; also one with Khrushchev’s son (a doctor); and others with KGB/CIA operatives and the pilot who photographed the actual sites that broke the news to Washington.

We also get priceless reel-to-reel audio tracks of a JFK Cabinet roundtable that included a lot of pro-nuke, damn-the-consequences hawks (think Strangelovian Air Force Gen. Curtis LeMay) who fortunately didn’t capture the president’s ear. Someone here notes that the outcome of historical events can sometimes turn on the pure meshing of individual personalities, and here it was Kennedy (millionaire’s son) and Khrushchev (peasant’s son) who, no exaggeration, may have saved the world. Though he and his own hardliners precipitated the mess, Khrushchev deserves to be treated well by history on this count — especially given that he had to deal with a Castro who, as related here, gradually became unhinged and took a “bring it on” attitude in terms of nuclear one-upmanship — an attitude the Soviet leader didn’t care to enable.

Over the 13 days, there were a few remarkable sub-cliffhangers brought on by the faulty communications of the day (no World Wide Web to facilitate, just some lonely courier to transport a cable) and by an American pilot who had the misfortune to make a faulty turn at the worst possible spot on the 1962 globe. Not to trivialize it — but for those seeking timeline perspective, the crisis began the very day the Yankees beat the Giants 1-0 in a memorable seventh game of the World Series, one chronicled in the “Peanuts” comic strip for weeks to come. It was and is regarded as a classic nailbiter — but absolutely nothing compared to what was about to transpire.

New on Disc: 'The Man Who Knew Too Much' and more …