American Experience: The War of the Worlds (DVD Review) 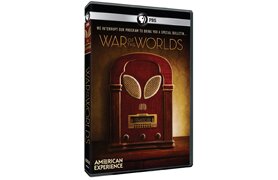 When you come right down to it, the famously hysterical national reaction to what was essentially an unsponsored radio cultural affairs show was the fault of … MGM baritone Nelson Eddy?

Well, up to a point, anyway — which is among the top revelations one takes way from a halfway irresistible “American Experience” entry. That is, if you take away one irritating feature that the filmmakers seem to be proud of despite its tarnishing of the series brand.

The broadcasting legend we’re speaking of is Oct. 30, 1938’s still famous Orson Welles-John Houseman production of H.G. Wells’s The War of the Worlds for CBS Radio’s Mercury Theater of the Air — a Halloween lark that went wrong (though hardly for Welles’s reputation). This is because more people than you’d guess — though I’ve always suspected that time has ballooned the number — took the program at face value and convinced themselves that the world was about to end, courtesy of invading Martians.

Of course, a significant number of dial surfers got the impression that these perpetrators of imagined mayhem were not from another planet but, in fact, the already feared Germans of the 1930s. So, aha! — this puts the events into context and makes it a little more difficult to patronize or ridicule members of the terrified public from the vantage point of 75 years when television, much less the Internet, didn’t yet exist to make us oh so sophisticated. As the documentary points out, radio listeners weren’t listening exclusively in the ’30s to, say, radio crooners or Amos ‘n’ Andy. There was a steady diet of news about encroaching Germany and the dreadful damage done by the Depression — but also, and more to the point, the public had already heard that famous Herb Morrison live reportage of the Hindenburg explosion during that passenger zeppelin’s attempt to land in Lakehurst, NJ, about a year-and-a-half before Welles, Houseman, and War scripter Howard Koch went to town. Morrison’s emotional delivery witnessing the resulting incendiary horrors made such an impression that even decades later, its playing (and I used to own an LP of the entire broadcast) was a staple of college journalism classes when it came to discussions about how deeply a reporter should get involved with his or her story.

So with this backdrop, Martians landing in (again) New Jersey had an element of credibility — though as we learn here, the decision to reformulate the drama as an on-the-spot newscast wasn’t reached until a couple days before the actual show when a hitherto distracted Welles took his first real look and listen to what was about to air and thought it so lackluster that something had to be done. At this point, this legend-in-the-making was a force of the New York stage but not any kind of national household name; the War airing was sustained (i.e., it ran without any need for commercial breaks), which meant that unless a viewer knew what program was on or caught it from the beginning, he or she could surf the dial airwaves unsuspecting and be treated to a mighty rude surprise.

Which is what happened. The big show on radio that night in the same timeslot was "The Chase and Sanborn Hour" with Edgar Bergen and Charlie McCarthy — the show where Bergen (who wasn’t a good ventriloquist but definitely a funny one) pulled off one of the greatest coups in history by landing a gig where he was able to ply his trade on the radio. (This reminds me that in college, I once interviewed Marcel Marceau on the phone, but that’s another story.) The program naturally began with some Bergen-McCarthy comedy before giving way to show regular Eddy’s singing — whereupon there was enough of a listener exodus to elicit a mass fiddling of radio dials. The rest is history because a lot of those dials landed you-know-where.

The gripe I have with this documentary, which does put across a lot of keen history in digestible form, is its transparent re-creations, in which professional actors portray listeners who reacted in panic and/or wrote letters to CBS or Congressmen (some of them the forbearers of today’s showboat hacks). It’s a phony device in the first place, but most of the actors here are additionally over the top. As a footnote, you can see a rare instance of how this normally dubious practice can be pulled off by checking out gorgeous redhead Wrenn Schmidt in Alex Gibney’s Client 9: The Rise and Fall of Eliot Spitzer — who spouts only official investigation testimony when playing the high-priced call girl who was most involved with New York’s former governor. Oddly, War’s filmmakers seem pleased with themselves over this phony approach in the disc’s bonus material, which deals with the re-creations (a rare instance of a PBS disc having supplemental materials in the first place).

The time might have been better spent examining the broadcast’s legacy. I have in my own archives — somewhere — the late Jack Paar on a talk show relating how he was working that Sunday night at a Cleveland affiliate as a staff announcer and having to field calls from petrified call-ins. Also in existence — it’s on a "Studio One" DVD box that came out several years ago — is 1957’s live-TV remembrance The Night America Trembled, which features younger versions of Ed Asner, Vincent Gardenia, Warren Oates and even Warren Beatty in its cast. The War documentary employs kinescope clips from the latter (we get a glimpse of Oates) but doesn’t otherwise acknowledge it.

The most ticklish moment here comes near the end when Welles (who escaped major network retribution) pretends to be humble and even a little contrite over a project that got out of hand, a role that didn’t come easy to him, as an interviewed Welles daughter seems to know. The director’s crocodile misting (tears would be putting too fine a point on it) didn’t last long, in any event. Citizen Kane, without apologies, was just three years away.

New on Disc: 'American Experience: The War of the Worlds' and more …