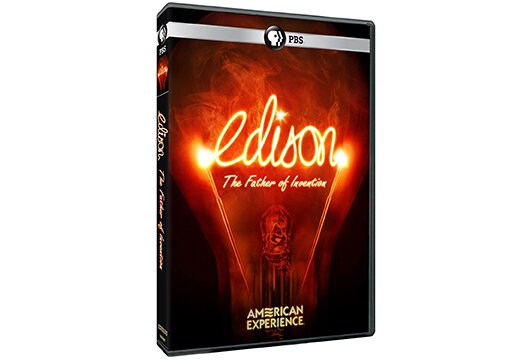 In a life that had absolutely nothing to do with the Mothers of Invention, Thomas Alva Edison helped launch the modern era in obvious ways — and less obviously so in terms of successfully selling and maintaining his “brand” when it came to competitors, who were not among his favored species. Later in life, he became good friends with Henry Ford, but the auto magnate steered clear of Edison’s self-perceived turf in a way that, say, Alexander Graham Bell and Westinghouse personnel did not. Running a full two hours (well, 114 minutes) as only occasional “American Experience” documentaries do, this portrait is deservedly respectful, though it also addresses the type of dark-side material we never get in MGM’s factually embellished 1940 Edison, the Man with Spencer Tracy — a notable childhood favorite of mine that I haven’t seen in decades (I may take a look thanks to renewed interest this new portrait easily drums up).

For Edison, the work and “solving problems” were all that mattered, and this extended to his home life. His first wife, several years younger, was ill-equipped to deal with a spouse totally consumed — one who spent all his time in a New Jersey lab whose nearby proximity to the family home didn’t keep him from taking a “see you in a week and say hi to the kids” approach. Wife No. 2 (after No. 1 died at 29 of a possible morphine overdose) endured the same treatment, but she had her own interests and had been raised among the more powerful, so this union worked out better. Despite my fuzzy memory, I’m certain that the Louis B. Mayer version of the story didn’t go near this part of the legend.

The new-fangled telegraph and its operation first planted the seeds of the coming 20th century in the mind of a young Edison, and he taught his first wife the dots and dashes that enabled them to communicate in courtship via hand-touching without the rest of the world knowing what they were saying. After this, Edison knew fairly quickly that inventing things was going to be his calling — but unlike other tinkerers of the day, inventions were going to be his day job instead of something to indulge in at night after days toiling at some other presumably more remunerative labors. To do this, he needed investors or (as he called them) “money men” — and Edison became fairly proficient early on at charming those with deep pockets, though to do this, he needed to wear more than one hat, which he did. Edison put on a good professional show for the press as well, showing up for interviews in a lab coat and with streaks of dirt and sweat in all the right dramatic places. Much later, when he demonstrated the electric light bulb for the train of reporters who had journeyed up to New Jersey’s Menlo Park back when Chris Christie’s grandfather was barely an idea, Edison the orchestrator saw to it that the otherwise nocturnal setting was littered with illumination inside and out. It doesn’t take much imagination to sense how wowed they must have been at such showman instincts — though typically, Edison had publicly promised that lighting all of southern Manhattan was just days away from completion when he really didn’t have an idea of what he was doing (or at least how to make a filament burn for more than half-a-minute).

Earlier, Edison had added recorded sound to his resume so that I (as earlier today) could listen to Art Pepper on my iPod while slogging on the treadmill at my gym. Of course, the iPod (or even an old Crosley phonograph) were decades away — and the crude early set-up that permitted the early reproduction of a “Mary Had a Little Lamb” recitation was something of an accident that occurred while Edison and his quickly expanding crew were just fooling around in the lab with their minds possibly even on something else. The idea behind it was embarrassingly simple (what a little needle could do), and rival Bell of telephone fame reportedly kicked himself that he hadn’t seen the secret right in front of him.

The concept of moving images is a little murkier in history because France (with the Lumiere brothers) was approaching the subject from a different direction than Edison; missing from any discussion here is England’s often overlooked William Friese-Greene — subject of an historically unreliable but sumptuously produced 1951 biopic called The Magic Box that captured my imagination as a youngster (around the same time as Edison, the Man) but did not really succeed in its rehabilitative mission to give its subject a bigger piece the historical pie. It’s fascinating to think of how long a lot of this back-and-forth was going on before we got to the emergence of The Birth of a Nation, which has just celebrated its 100th birthday (though no one is particularly celebrating) as we speak. It’s also kind of interesting, and certainly symbolically appropriate, that Edison died in 1931, the first year that talking pictures really got their act together.

Despite a heavy reliance on still photos for its visuals, Father moves along at a galloping clip, and when it finally gets into the twilight years captured by early motion pictures, we see evidence that Edison has finally begun to relax (the fact that his hearing was about gone perhaps abetted this). Here was a guy so driven in his younger days that after a longtime friend and even partner pulled something of fast one on him, he found a way to turn the water off in the former’s adjacent vacation home in addition to firing him. Well, this is what drive can sometimes be all about — as is the ability to get up off the canvas. We see, late in the story that Edison lost millions of his own money in a failed ore project — and even more stash when much of his grandiose work facility burned to the ground. His solution was to take the night off and come to work the next day as part of a durably fascinating tale enlivened here by an array of enthused historians and Edison biographers. It even manages to make a pro vs. con discussion of AC and DC compelling.

New on Disc: 'Far From the Madding Crowd' and more …