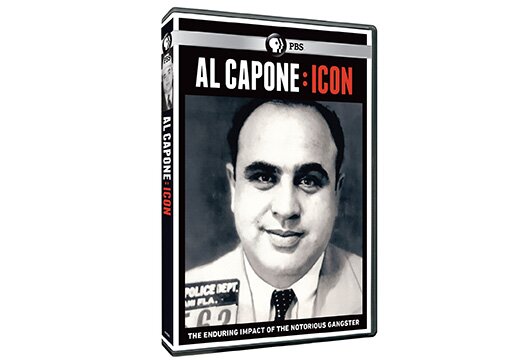 Every historical figure this side of Earl Butz gets termed an icon these days, but the Capone credentials on that count will likely never be in doubt — even as a sartorial icon, which is one of the points made here. Here’s a guy you have to guess didn’t look too hot in his BVDs but knew more than a little about lapels, which is the kind of plus you have to have going for you when you’ve earned the name “Scarface” in honest fashion and are halfway to attaining that Alfred Hitchcock portly look. For this and other reasons, America’s best-known hood now rates a PBS-distributed documentary that is not part of network’s esteemed “American Masters” series because, for one thing, it would be jarring if not all-out tasteless to put Capone into the same category as, say, Arthur Rubinstein. (Actually, Capone kind of was an American Master in his own way … but, well, you know …)

And … don’t think any biographical portrait in the classier PBS “Masters” collection would ever impair itself with the kind of visual anachronisms that detract from the array of knowledgeable talking heads we see here from many fields, all of who know of what they speak. In other words, this is the kind of documentary that talks about Louis Armstrong during his relatively primitive “Hot Five” era (Capone was a major force in the evolution of jazz) and then shows us a picture of the trumpeter that’s clearly form the ’50s or ’60s when you’d expect to see him breaking into a duet with Bing Crosby. It’s also one where, in a discussion predominantly about gangster movies of the early 1930s, we see a poster for 1947’s The Gangster, with Barry Sullivan, made when the postwar Monogram Pictures was trying to segue into prestige by spinning off into Allied Artists. Otherwise, this lukewarm bio makes some good points (Capone’s clotheshorse dimension is merely one of them) — though if you ever want to read a meatier full-length biography of history’s premier bootlegger, the one by Laurence Bergreen is a gripper.

A central thesis of this documentary is that bootlegging so “made” Capone’s career that if Prohibition hadn’t existed, it’s likely that he’d never escaped the lower rungs of Chicago sociopathy, where the brother of a woman Capone had been harassing sliced up his face with a knife (wounds might have been more serious had the assailant not been drunk). Given that Prohibition led both to Capone’s  professional success (for a while) and also the institution of the same Federal Income Tax (more on this later), one moral here is that it might be good advice never to listen to moralists who can see no further than the end of their blue noses because the ramifications of their actions might be protracted.

Instead, Capone saw a need for beer and booze that needed to be filled, and along the way he became a celebrity by embracing his notoriety and even wearing it on his sleeve. He would appear at Major League Baseball games, where I’m guessing he got a lot more cheers than the boo-drowned Dick Cheney did the last time he showed his face at a Nats contest in Washington. He also either did or didn’t operate a significant soup-kitchen concern for hard-pressed Chicagoans during the Depression (not much photographic evidence survives to confirm his largesse beyond one such undeniable establishment). But as one observer here notes, what would a million or two here or there matter for PR expenditures for a guy clearing a hundred million dollars a year?

In addition to “Al Capone, Fancy Dresser” and “Al Capone, So-Called Philanthropist,” there is also the Al Capone as a catalyst in the history of early talkies. Beyond Edward G. Robinson in Little Caesar and James Cagney in The Public Enemy, the legacy also includes, of course, Paul Muni in the more literal Howard Hughes/Howard Hawks take on Capone directly: the original Scarface from 1932. It has been noted (though I can’t recall if the factoid pops up here) that Capone loved the Muni portrait so much that he successfully requested a personal print of the film — irony of irony, given the number of decades that Scarface-’32 could not be legally shown post-release due to the usual eccentric Hughes machinations (it was finally sprung in 1980 after Hughes died).

And this is nothing compared to the afterlife, all the way up through “Boardwalk Empire.” Long after Hollywood’s initial gangster cycle, there was a revival beginning about a quarter-century later with the 1959 Rod Steiger Al Capone — which launched a cycle of “hood” biopics that further gave Dutch Schultz, Legs Diamond and Mad Dog Coll their five minutes). Later, there was Roger Corman’s 1967 take on Capone (which put an unlikely scar on Jason Robards’ face); another 1975 Ben Gazzara bio (whose subject has been historically usurped by Susan Blakely’s notoriously revealing nude leg-spread for a major studio release); Robert De Niro’s colorful portrayal of Capone in Brian De Palma’s 1987 version of The Untouchables — and, of course, Robert Stack’s beloved-by-Boomers hagiography of Capone-buster Eliot Ness in the earlier TV version of the same (the ABC-TV classic where any hoodlum who went into a phone booth was automatically going to receive machine-gun bullets as change). As this documentary points out, the real Ness was a marginal-at-best figure in Capone’s downfall, but Feds packing heat were more exciting and cinematic than the accountants with ledger sheets who eventually brought him down.

The most famous movie to deal with Capone did so fictionally and indirectly in, of all things, a belovedly farcical framework — though the incident portrayed in Billy Wilder’s Some Like It Hot proved most prominent in his downfall, from the public’s POV. This was the St. Valentine’s Day Massacre of Capone rival Bugs Moran’s subordinates in 1929 — a landmark in brutality that conveniently took place when its presumed perpetrator was out of town, which is why the debate goes on today (the panel of experts here is similarly divided) as to whether or not the slaughter was really a Capone production. No matter: the killings became a kind of guilt-by-association blot on the Robin Hood image Capone tried to perpetrate, and he was no longer viewed with as much favor by regular joes.

Not too long after this, the government accountants began assembling their tax evasion case — which, as we learn here, was sustained by shaky evidence (there wasn’t exactly a paper-trail warehouse) that the jury nonetheless bought. Though Capone lived like a king for a while in prison, he was eventually shipped to Alcatraz as a government publicity stunt as part of an unglamorous finish: a tax rap and then death by syphilis (neither being the stuff of which icons are usually made). But he ended up enduring as one, anyway, thanks to the legislative actions of those who had temporarily lost their minds and whose great-great grandchildren are probably yelling “Stella” (as in Artois) in Stanley Kowalski fashion as we speak.