Star Trek: The Next Generation — The Best of Both Worlds (Blu-ray Review) 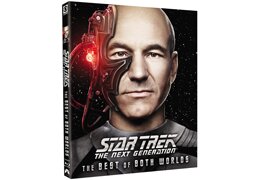 When “Star Trek: The Next Generation” debuted in 1987, no one expected it would ever supplant the original series in terms of awareness or impact. A rocky first couple of seasons seemed to bear this out, though the fact that “TNG” was syndicated gave it a great deal of leeway to continue to improve. By the third season, the show came into its own, putting more emphasis on its characters and building the groundwork for a massive expansion of the franchise, including “TNG” movies and three more spinoff shows.

One of the cornerstones of this “Trek” renaissance is “The Best of Both Worlds,” the first season-ending cliffhanger in “Star Trek” history.

The episode’s legacy is undeniable, not only in terms of how it shaped “Trek” storylines for another 15 years (the 1996 “TNG” film First Contact was a sequel to this episode), but also the way it influenced televised sci-fi in general by increasing the stature and popularity of “TNG” as a series.

The episode featured the return of The Borg, an alien menace introduced the year before. The Borg would assimilate any species and technology into their hive mind, and managed to capture Capt. Picard (Patrick Stewart) as they made their way toward Earth. The Enterprise had one chance to stop them with a massive new weapon, and as Cmdr. Riker (Jonathan Frakes) ordered the crew to fire on their assimilated captain, the screen faded to black, forcing viewers to wait three months to see what happened next.

In a half-hour retrospective documentary included with this special Blu-ray of both episodes, avid “Trek” fan Seth MacFarlane recounts that “TNG” ruined his summer. Stewart says he thought he was being written off the show. And the rest of the cast were as anxious as the fans to find out what happened next.

This Blu-ray edition of the two-parter won’t make anyone wait for the conclusion, seamlessly combining both parts into a brisk 90-minute movie as part of the ongoing effort to remaster “TNG” for high-definition by rebuilding the show in HD using the original film elements. The episode had top-notch special effects when it first aired in 1990, but the remastering effort really makes them pop in HD.

It isn’t a perfect rendition, however. The editors have trimmed the first few seconds of the second part in order to fit the episodes together a little more tightly. And there are three seconds of footage an hour in that the disc indicates couldn’t be found, and thus had to be replaced with upconverted standard-def footage (and there is a noticeable difference in quality — hopefully they can find the missing footage before the fourth-season Blu-ray is due to come out).

They also could have added in scenes from the Battle of Wolf 359 from the first “Deep Space Nine” episode, “Emissary,” but this is more the realm of the fan edit than any official version of the episode. Seeing the husks of destroyed starships in the aftermath of the battle with the Borg remains a chilling scene.

The biggest shame in regards to the release is that the episode’s writer, longtime “Trek” producer Michael Piller, died in 2005 and couldn’t add to the retrospective. He did discuss the episode on the original season-three DVD from 2002, in a featurette that carried over to the highly recommended season-three Blu-ray (also releasing April 30), in which Piller confessed his intention to leave the show after the third season, and wrote a cliffhanger he never intended to solve. Thus, when he was convinced to return, his first job was to paint himself out of the corner. So the second part, while still a brisk, action-packed hour, isn’t quite as tight as the first.

Even so, “Best of Both Worlds” is regularly listed among the greatest “TNG” episodes of all time (alongside another popular season-three episode, “Yesterday’s Enterprise.”)

In addition to the retrospective documentary, the Blu-ray includes a great commentary with Mike and Denise Okuda, who worked on the show and are key figures in the effort to remaster it, as well as guest star Elizabeth Dennehy and episode director Cliff Bole. The group offers up a lot of great stories that “Star Trek” fans won’t want to miss.

Star Trek: The Next Generation — Season One (Blu-ray Review)