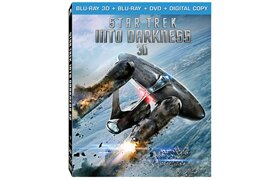 I know J.J. Abrams’ “Star Trek” reboots have made tons of money by infusing the franchise with heaping doses of action and special effects. But the particulars of this latest installment are begging the question: Why would you spend one movie polarizing the established “Star Trek” fan base in order to reset the franchise to free yourself from existing continuity, only to follow it up by re-introducing elements from the very continuity from which you were trying to distance yourself?

It’s a question even the filmmakers ask in one of the bonus featurettes, and the answer boils down to some “Trek” staples being too indelible to pass up, and certainly fans can appreciate the effort. In some ways, this film seems almost to be apologizing to those fans who thought the first film was disrespectful to the previous incarnations of “Star Trek.”

The story this time around finds Kirk, Spock and the Enterprise crew in conflict with a rogue Starfleet agent bent on starting a war with the Klingons. The “Into Darkness” part refers to abandoning the Federation’s ideals to justify national security, which is a theme explored on several of the older shows but also carries a relevance to current events.

Abrams and his team have set up these new adventures as taking place in an alternate reality branched off from the old, although several echoes from the past pop up again here. The hokiness of this approach becomes clear in the climax of Into Darkness, which falls apart because it’s built on several scenes that are practically shot-by-shot re-creations of famous sequences from earlier “Trek” movies, given enough of an alternate reality twist that we can practically see the screenwriters winking at the audience.

Don’t get me wrong, at first blush Star Trek Into Darkness is wildly entertaining in much the same way as its 2009 predecessor. If they can shut down the geek centers of the brain that house their familiarity with the “Star Trek” canon, even longtime Trekkers might find themselves enjoying this film as much as mainstream audiences enthralled by all the flashy lights and pretty colors, not to mention several instances of characters beating the crap out of each other. The 3D version offers an additional level of distraction, though it certainly isn’t intrinsic to the viewing experience.