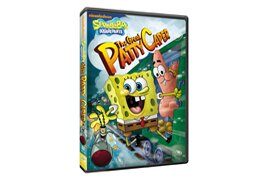 Who lives in a pineapple under the sea? And entertains children while not driving their parents up the wall? SpongeBob SquarePants!

OK, so the real version of the “SpongeBob” theme song is a lot catchier, but you get my drift: SpongeBob continues to be one of the best brands not just for children but their parents and young-at-heart adults. “The Great Patty Caper” is one of the better SpongeBob episodes in recent memory, and the accompanying episodes on the Caper disc are similarly high in quality.

“The Great Patty Caper” sees everyone’s favorite naïve sea sponge and dimwitted starfish best friend, Patrick, embarking on an adventure to recover the sacred Krabby Patty recipe, before their rival, the evil Plankton, can steal it to use for his inferior Chum Bucket restaurant. It’s one of the more epic SpongeBob episodes but never takes itself too seriously, or seriously at all.

Perhaps that’s why this show has continued to work after seven seasons, making it the clear successor to the “Looney Tunes” brand of absurdist, intelligent and offbeat (yet mainstream) children’s cartoon. From “Stuck in the Wringer,” in which SpongeBob tries to go about his daily life while being stuck in a clothing wringer (don’t ask) to “Someone’s in the Kitchen With Sandy,” in which SpongeBob’s squirrel friend Sandy tries to reclaim her fur from Plankton but gets arrested for indecent exposure, SpongeBob is full of knowing winks to its adult audience and clever laughs.

The DVD also includes animated SpongeBob shorts that are more like commercials for the show but are welcome bits of entertainment in their own right.