We Need to Talk About Kevin (Blu-ray Review) 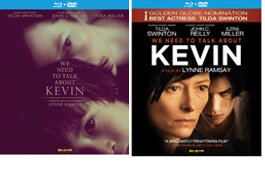 Our worst nightmares happen — how do you deal with it? That’s the basic premise underlying We Need to Talk About Kevin, about a mother who realizes early on that her child is a psychopath.

Eva (Tilda Swinton) is a free spirit who loves to travel. We see her take part in the La Tomatina festival in Spain, where visitors participate in a huge tomato fight in the streets. Upon returning home, she becomes pregnant by her husband, Franklin (John C. Reilly) — maybe, as the film is a little ambiguous as to whether or not he impregnated her or someone else did.

From there we’re thrown into a real-life Rosemary’s Baby scenario in which Eva struggles to connect with her child, Kevin, or even make him smile, as he shrieks without end as a baby and resists language and potty-training as a toddler. Interspersed we see a present day Eva struggling to put her life in order, following a tragedy involving Kevin.

Scottish director Lynne Ramsay adapts Lionel Shriver’s novel remarkably, lightening the mood with choice song cuts and dark humor and showing a keen eye for detail, such as the funnily bleak travel posters (Tampa!) in the office in which Eva works, though she goes a bit heavy on the blood symbolism (tomatoes, paint etc.). The film is never more relevant — a recent New York Times article by Jennifer Kahn suggests psychopaths can be detected as early on as 5 years old. It’s hard to argue with that, in the wake of tragedies such as Columbine and others we seemingly hear about daily involving young people.

The actors are stupendous — what else do you expect from Oscar-winner Swinton, playing it extra harsh and wan, even for her standards, and Oscar-nominee Reilly, lending the film some wanted warmth? However, despite the deserved praise for Swinton, who many expected to get another Oscar nomination for the film, my heaviest praise would be reserved for Ezra Miller, whose quivering sneer gives the film its most chillingly memorable moments, as well as remarkable newcomer Jasper Newell, who plays Kevin as the emotionally manipulative toddler.

The actors’ work helps make the film’s question of nature vs. nurture hit home — we sympathize with Eva, even as she explodes with anger at Kevin as a young child and injures him, and we feel for Kevin even as we fear him. You feel like their dilemma is yours, and that makes We Need to Talk About Kevin a consummate psychological horror film.