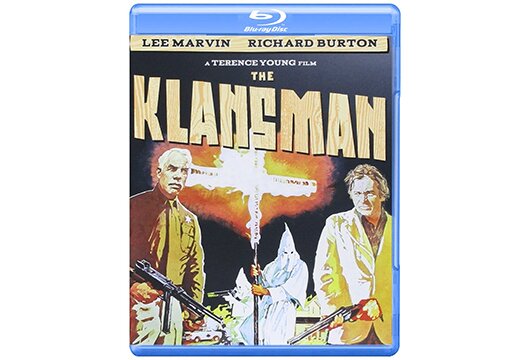 Allegedly filmed in something akin to an outdoor drunk tank and rightfully regarded as one of the worst big-star screen vehicles ever made, The Klansman nonetheless is tough to deny and maybe even essential in terms of mind-melting finesse. When, for instance, is the last time you saw a rifle-toter remove his Ku Klux Klan duds after unexpectedly filling a white cracker with lead, and the dude under the sheet turns out to be O.J. Simpson? Then again, the garb does help the Juice’s character work his way into vicinities that wouldn’t otherwise welcome him or facilitate his squeezing of the trigger.

Talk about a studio diversifying its portfolio. Paramount in 1974 could boast The Godfather Part II and Chinatown for undisputable critical posterity and also The Parallax View and Daisy Miller as rightful candidates for cultist curtsies. Even on the red meat, drive-in level, The Longest Yard filled the bill better than most of its ilk (and the ilk was pretty sizable in the early ‘70s). Then, again, here was The Klansman, whose on-paper pedigree wasn’t bad and where everything went wrong, starting with Samuel Fuller (ultimately still credited as one of the screenwriters) exiting as director and being replaced by an apparently not too interested Terence Young. Even on an exploitation level, the dialogue is so racially crude (even by some vels, rightfully regarded as one of the worst big-star screen vehicles ever made, but nonetheless tough to deny and maybe even essential in terms of mind-melting finesse.of the black characters) that it’s tough to single out blame. The top-billed scripter was Millard Kaufman, whose name does appear on a couple good movies (in addition to “fronting” on Gun Crazy for blacklisted Dalton Trumbo): The War Lord and Bad Day at Black Rock. The last, of course, gave Lee Marvin one of his most memorable pre-stardom roles.

Of the actors here, Marvin is arguably the one (and only one) who gets away with career dignity more or less intact, as he’s cast as an Alabama sheriff in a sphincter of a town who’s trying to keep law and order as the Klan runs rampant. Beyond committing rape (both Linda Evans and Lola Falana play victims), these low-end locals have also castrated O.J.’s buddy in an act of falsely motivated revenge, inspiring Simpson’s rampage. Other than a super-obscurity called Why, which apparently was never released, The Klansman marked Simpson’s first big-screen appearance after a run of TV credits. The year before, he was apparently on a “Here’s Lucy” episode, which I’d certainly be willing to pay more bucks to see than, say, another Marvel movie.

Mustached Marvin is only marginally less racist than the Klan members he’s trying to keep in line, but other than an articulate power broker played by David Huddleston (somehow, you know going in that Huddleston just has to be in this movie), he’s one of the few who can put a noun against a verb in something close to linguistic harmony. This is, after all, a burg where a key member of the local brain trust is Marvin’s deputy — a fellow named “Butt Cut” (though half-presumably not by his parents) and played by Cameron Mitchell. And yes: somehow, you know going in that Mitchell also just has to be in this movie.

Still, the one truly refined guy in town has to be the geographical and spiritual outsider played by Richard Burton, who (according to universally accepted screen folklore) may or may not have been drinking more on the set than Marvin but whose performance appears to have been more adversely affected by the sauce. As cross-references go, I’d rate Burton’s Klansman demeanor as about a tie with Leo Gorcey’s in 1956’s Crashing Las Vegas, in which the latter’s work-hour drinking lead to his permanent firing from the Bowery Boys franchise and hastening both the series’ death rattle and any future chance for Electronovision buffs to experience Gorcey’s own interpretation of Hamlet.

Cast as one whose grandfather was lynched over his liberal beliefs and subsequently sports his own live-and-let-live credentials, Burton doesn’t exactly slur his diction but looks more than a little glassy in the eyes, even when he’s sharing sack time with Luciana Paluzzi. And you have to wonder about the Klansman screenplay noting that his character is physically impaired — so much so that he sometimes employs a cane. Is this because Burton wasn’t walking to well during production? The saddest scene comes when Burton’s also script-alleged karate expertise enables him to wipe out Mitchell in a haphazardly constructed fight that you have to believe was inspired by Kaufman’s own Bad Rock script, which had in one classic scene famously pitted Ernest Borgnine against an iron-palmed Spencer Tracy. Given Bad Rock’s own recent Blu-ray release, it’s not too difficult to do a right-way-wrong-way comparison when it comes to staging this kind of set piece.

Speaking of recent Blu-rays, Warner Archive has just done a pleasing job with director Young’s crisp rendering of Wait Until Dark, which re-establishes that he at least had a little more in him beyond my two favorite James Bonds: From Russia With Love and Goldfinger. This one, though, reminds me of a question my late, great friend Burt Shapiro used to ask about certain movies (“Was this directed or patched?”) despite its having been edited by two-time Oscar winner Gene Milford (four Kazan films including his second Oscar source On the Waterfront). The Klansman was the kind of resumé killer that possibly put Young’s career on the road to Inchon — though as far as I can tell, Olive’s print is complete (the Falana rape scene is sometimes mercifully cut down), which is a blessing for historical accuracy but maybe not a whole lot beyond that.

And yet, here’s an essential artifact of an age on array of dubious place-in-time levels, including the scene where our man Orenthal calls Burton a “boy.” Hearing him flout the term, “Buush-wah Negro” isn’t to be sniffed at, either.