'Stargate: The Ark of Truth' on DVD March 11 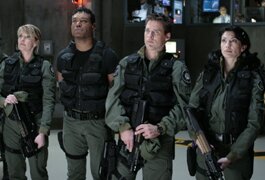 Stargate: The Ark of Truth

Stargate: The Ark of Truth, the first of two direct-to-video movies based on the long-running “Stargate SG-1” TV series, will debut on DVD March 11 from MGM Home Entertainment.

The film concludes the primary storyline of seasons nine and 10, picking up after “Unending,” the series finale.

Extras on the $26.98 DVD include a commentary and a featurette recapping the events that led to the movie. Orders are due Feb. 13.

Robert C. Cooper, who executive produced the “Stargate” TV series, had the same role with The Ark of Truth. He also wrote and directed the film, which follows the SG-1 crew searching for an ancient weapon that could help them defeat the sinister Ori force — only to find themselves in a distant galaxy fighting two powerful enemies.

The Ark of Truth is one of two direct-to-video “Stargate” movies in the works. The second, Stargate: Continuum, is being helmed by Martin Wood, who directed more than 70 episodes from “Stargate SG-1” and its spinoff, “Stargate Atlantis.” A DVD release date for Continuum has not yet been set.

Why move the “Stargate” franchise to DVD?

“We believed there were still ‘SG-1' stories to tell, and the studio obviously thought there was a market for the product,” said Cooper, who provides a commentary track on the Ark DVD.

With 214 episodes, “Stargate SG-1” is the longest-running science-fiction show in American television history. Cooper noted that the show's ratings were still strong when it ended its run, ratings for “Atlantis” continue to be strong, and sales of the “Stargate” DVDs do very well.

While the movies are based on the “Stargate SG-1” TV series, they have a different look and feel than the original TV episodes, Cooper said.

“Overall, the movies feel like they are a little bigger and a little richer than the show,” he said. “We shot in 35mm film, framed for 16x9, and spent the money on some sets and locations we never could have afforded on the series. We also shot the movies with a bigger scope in mind. In TV you tend to concentrate a little more on close-ups, but in this case we tried to shoot a little wider. And we also were able to afford a symphonic musical score.”

Creatively, there are differences as well. “On the show we had a five-act structure, and we designed the stories around commercial breaks,” Cooper said. “As such, on average you really ended up with about a seven- or eight-minute climactic sequence in each episode. The DTVs are more structurally like movies, with a beginning, middle and ending — long, sustained action that ramps up to a satisfying conclusion.”The two DTV movies are quite different, Cooper notes, and hopefully will set the groundwork for more DVD movies, based on the series, to come.

“Ark of Truth really is much more of a conclusion — the final chapter in the Ori storyline that had been the major arc for seasons nine and 10,” he said. “There were a number of unresolved story and character issues, and we felt a responsibility to fans to wrap things up in a big way.”

Continuum, on the other hand, is “a good old-fashioned ‘SG-1' standalone story that will hopefully show our audience that there are still ‘SG-1' stories to be told with this cast beyond the wrap-up in Ark of Truth,” he said.

“We obviously hope both movies together can help ‘SG-1' transition into a series of these types of films,” Cooper said. “If they also bring new fans to the franchise and maybe inspire people to go back and watch the show in reruns or on DVD, that would be great, too.”