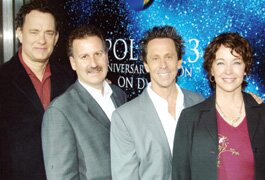 Space exploration inspired actor Tom Hanks long before he starred in Apollo 13, due March 29 in a 10th anniversary special-edition DVD.

“The space program for me when I was growing up was a catchall for almost all the disciplines we were studying in school,” Hanks said at last week's bicoastal screening. “It was history because history was being made with almost every flight. It was science because of the nature of rocketry and space travel. It was geopolitics because we were in a race with the Soviet Union. But more than anything else, it was also romance; it was poetry. I was very inspired by the romantic notion of human beings flying these vessels into outer space the same way Christopher Columbus did or the Vikings did or Marco Polo did.”

Universal Studios Home Entertainment held Imax screenings at the California Science Center in Los Angeles and The Kennedy Space Center in Florida March 22. On the West Coast, star Hanks and producer Brian Grazer were connected by satellite to director Ron Howard and astronaut Jim Lovell in the East.

Grazer and Howard recounted the development of the film, including the difficulties of bringing suspense and emotion to a story that the world knew. That prompted Lovell to recall his own excitement at seeing his story portrayed on film.

“I have to really compliment Ron because he kept people, including myself when I went to see it, on the edge of the seat to find out if I was really going to make it,” he said.

Universal Studios Home Video president Craig Kornblau appreciated the chance to host an event with two goals. “This is a highly entertaining film,” Kornblau said. “It's also a highly educational film. Between the actual Apollo 13 event and the release of the film Apollo 13, it's really remembering two things.”

The Imax version of the film is included on disc two of the DVD package. With a different aspect ratio and some edits for length, Kornblau said the DVD inclusion was “just another opportunity to see the film in a slightly different way.”

“Between the archives that we have at the studio and the archives we now have because of the integration of NBC and their news archive, we found some rich new content that we could add on,” Kornblau said. “It gives us a more authentic, well-rounded experience for the consumer to be entertained and educated.”