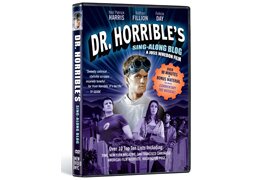 What is that indelible quality that makes ardent fans want to embrace anything Joss Whedon creates?

First came “Buffy the Vampire Slayer” and its spinoff, “Angel.” Then the space Western “Firefly” and its movie version, Serenity. Then “Dollhouse,” heading into its second season.

But in early 2008, to wait out the writers strike, Joss and his friends and family gathered to produce Dr. Horrible’s Sing-Along Blog, a wacky musical adventure starring a wannabe supervillain looking to achieve fame in the world domination game.

Neil Patrick Harris ("How I Met Your Mother") plays Dr. Horrible, who relates his plans to the audience and then bursts into song when they often don’t go his way (it seems the police also are keen viewers of his blog).

Dr. Horrible, in his secret identity as Billy, has fallen in love with Penny (Felicia Day), a local activist he met at the laundromat. Horrible also wants to join the Evil League of Evil, but his application is constantly rejected because his evil plots are always foiled by the heroic Captain Hammer (Nathan Fillion, a veteran of Whedon's "Firefly").

Adding to Billy’s woes, Hammer saves Penny’s life during one of Dr. Horrible’s schemes, and they begin dating.

Tragedy is the norm in the Whedonverse. Oh, the bittersweet hilarity of it all.

Given Whedon’s recent bad luck with mainstream studios, it comes as no surprise he would embrace the Internet like this. So eager are his fans for new material, that fan sites popped up within hours of the announcement that Dr. Horrible was even being made.

The story is told in three 15-minute chapters that originally were released online in July, in the lead-up to San Diego Comic-Con International. Thus, the total running time is about the same as a typical television episode.

Regular viewers of Whedon’s works will know this is not his first stab at musical comedy. He succeeded brilliantly with the concept in the sixth-season “Buffy” episode “Once More With Feeling.” Dr. Horrible evokes a similar vibe.

The songs are simple, with a catchy chorus and a clever hook, crafted brilliantly by Joss' brother Jed. The comic genius of the material stems from the writers crafting musical numbers around relatively mundane subject matters that somehow relate significantly to the various characters. For example, Penny’s haunting plea for signatures to support a homeless shelter transforms into a metaphor for the loneliness in her own life. I dare any viewer to try to go a week or two without humming a song from the show.

The DVD version includes the highly anticipated “Commentary! The Musical,” in which cast and crew relate their feelings in making the program through elaborate pre-planned musical numbers. Even some of the extras get involved. Don’t worry, a second, traditional commentary track also is included, as well as three behind-the-scenes featurettes.

But the master stroke that makes this a milestone in multi-media platforms is the inclusion of 10 Evil League of Evil applications submitted by fans. Some are better than others, but the creativity on display here really proves that the talent to create good works isn’t limited to a fortunate few denizens of Hollywood. The production value on display on some of these, and indeed many YouTube-type videos, is higher than studio dreck such as, say, Disaster Movie, which somehow keeps inspiring more work for its creators.

One gets the feeling watching Dr. Horrible and its fan-based spinoffs that this is just the start of something much, much bigger.