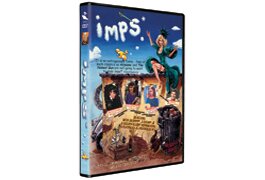 This artifact from the 1980s serves as a nice time capsule of popular culture from 25 years ago. IMPS*, which stands for the Immoral Minority Picture Show, is a sketch-comedy film in the mold of Kentucky Fried Movie.

It was produced in 1983 and apparently sat on a shelf without a wide release despite a cast that includes a huge roster of 1970s and early 1980s pop-culture icons. Linda Blair (The Exorcist), for example, spoofs her horror-film background in a fake trailer in which she plays a girl who gets mad at the announcer for pointing out her clichéd dumb moves.

As a collection of pop-culture gags, IMPS* offers some good laughs, but the film hits a lull in the middle with a slasher parody called Hanukkah Horror that runs for way too long.

Some of the funnier sketches include an early parody of ESPN in which late-night programming is filled with the “pencil sharpening championships”; a man kicked out of a bar for telling jokes during “unhappy hour”; and a mission controller having trouble communicating with the first black man (Jimmie Walker of “Good Times”) on the moon.

Extras include three deleted sketches of varying quality; a “Whatever Happened To …” series in which still photos of actors from the film are shown with trivia bubbles about their careers; and a “What Should Never Have Happened To …” segment that updates viewers on the lives of the different characters from the movie.