New on Disc: 'These Amazing Shadows' and More … 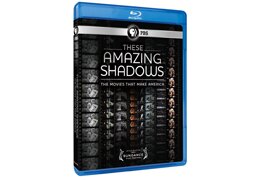 These Amazing Shadows: The Movies That Make America

Street 11/22
PBS, Documentary, $24.99 DVD, $29.99 Blu-ray, NR.
2011. There’s something special and, yes, even unique about the United States National Film Preservation Board’s National Film Registry. These screen achievements deemed extra worthy of preservation by the Library of Congress are selected by a board of scholars and film professionals who tend toward a historical perspective that Oscar voters and even some day-to-day critics don’t always have. As this grabber Paul Mariano-Kurt Norton documentary explains, the process began in 1988 in substantial reaction to Ted Turner’s decision to colorize the black-and-white movies he purchased from the MGM Library. This 88-minute history (with enjoyable extras) also makes the tandem case for film preservation, spending a lot of its time at the Library of Congress’ Packard Campus of the National Audio-Visual Conservation Center in Culpeper, Va., where prints are stored. Interviewees include Librarian of Congress James H. Billington and Packard Campus chief Dr. Patrick Loughney — also technicians who regularly handle the prints. Mariano and Norton don’t work a representative clip from every single Registry pick into the proceedings (at least, I don’t think so), but they get a lion’s share and certainly enough of them to remind any viewer of why he/she loves the movies.
Read the Full Review

Paramount, Western, $24.99 Blu-ray, ‘PG-13’ for intense battle sequences and some sexual content.
Stars Dustin Hoffman, Faye Dunaway, Chief Dan George, Richard Mulligan.
1970. Director Arthur Penn’s take on novelist Thomas Berger’s revisionist Western Little Big Man has its moments in addition to two or three outstanding performances. Dustin Hoffman’s Jack Crabb character, something like 121 years old as the movie begins, spends most of his early life going back and forth between the white and Native American cultures, even taking an Indian wife at one point. Having also befriended Wild Bill Hickok and stumbled into several encounters with General Custer (including a final one at Little Big Horn), he has come out of the experience with a wealth of sardonic perspective by the time of the opening pre-flashback scene, which finds actor Hoffman buried under mounds of latex that make him look more like 921. Hoffman’s performance holds it together, while Chief Dan George as Crabb mentor Old Lodge Skins was a stroke of casting gold.
Read the Full Review

The Last Time I Saw Paris

Available via WBshop.com’s Warner Archive
Warner, Drama, $19.95 DVD, NR.
Stars Elizabeth Taylor, Van Johnson, Walter Pidgeon, Donna Reed.
1954. This ubiquitously home-distributed screen version of an F. Scott Fitzgerald story (Babylon Revisited) gets a welcome 1.85:1 release. Even the image on MGM’s old Paris laserdisc wasn’t nearly as horizontal as what we get here. The movie begins with an irresistible hook: A Paris-based reporter, played by Van Johnson, is kissed by a stranger, played by Elizabeth Taylor, during the celebration of V-E Day. He then meets another more instantly smitten looker (Donna Reed), who turns out to be the kisser’s sister. What follows is a passionate Taylor-Johnson love affair/marriage full of boozing, while rejected Reed holds a grudge. Before the story plops into suds during the final half hour, Taylor fanatics will enjoy tracking her changing hairstyles (as her character’s life gets more complicated, the cuts get increasingly shorter).
Read the Full Review