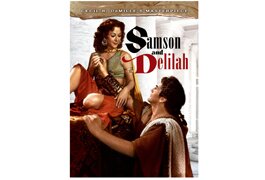 Paramount, Drama, $19.99 DVD, NR.
Stars Hedy Lamarr, Victor Mature, George Sanders, Angela Lansbury.
1949. Beyond imploring us to be very careful in our choice of hairstylists, the moral of C.B. DeMille’s penultimate Biblical spectacular would seem to be: Steer clear of Philistine chicks. Even the sister who doesn’t end up with Samson (a memorably blond Angela Lansbury as snooty Semadar) ends up being dispatched in one of the most memorable exits DeMille ever staged. As for the family’s other vixen … well, it’s actually Hedy Lamarr who gets top-billed here, which perhaps gives some indication of just how much blood ends up on Delilah’s eventually repenting hands. Still, Victor Mature was a slightly bigger star at this stage of the game, and it is Samson, of course, who adds a new dimension to the term “bringing down the house.” Mature probably provides some ammo here for detractors who said he was no actor, an assessment with which he concurred. But I always thought that despite a flair for self-parody that almost attained Dean Martin levels, Vic could read impossible beefcake dialogue with fairly impressive conviction — even if the stuffed lion he hugs here (while an obvious stunt double handles the tough stuff) isn’t much of a brief for the defense.

Lansbury and especially George Sanders (as “the Saran of Gaza”) give legitimately rich performances, though this is one of those spectaculars you watch to a great degree for the décor; the movie won Oscars for art/set decoration and costumes, while one of its three additional nominations went to George Barnes’ Technicolor cinematography. S&D is so good-looking that even my old laserdisc looks surprisingly OK — though it is, of course, nothing compared with the spiff-up it’s gotten here, which is Technicolor the way it ought to be. Running nearly 2¼ hours with its Victor Young overture, S&D feels longer than the 90-minutes-longer The Ten Commandments. But it is a still a movie for which many of a certain age still harbor affection — and not just those who saw it at the time.
Read the Full Review

Sony Pictures, Drama, B.O. $2.06 million, $30.99 DVD, $35.99 Blu-ray, ‘R’ for strong sexual content, brief graphic nudity, some violence and language.
In French with English subtitles.
Stars Marion Cotillard, Matthias Schoenaerts.
2012. This four-Cesar winner from France offers an absorbing love story that compels on multiple levels. In a movie not likely to be double-billed with Orca, the heavily employed Marion Cotillard plays a trainer of “entertainment” whales at one of those Marineland kind of places who keeps her head on straighter than Captain Ahab did following a work-related catastrophe. Coping with the loss of both legs, she refuses to lose her resolve, and there’s a great bit here midway in where an insensitive guy in a bar takes pity on her state when none has been solicited (to put it mildly). And speaking of insensitivity, this is where co-star Matthias Schoenaerts fits in — playing someone with the kind of Jake LaMotta tunnel vision you probably have to have to be one of those practitioners of extreme boxing. In contrast to Cotillard, his character is not physically but emotionally handicapped. Director and co-writer Jacques Audiard’s follow-up to the Oscar-nominated A Prophet is several movies in one — and top-of-the-line when it’s viewed as a story of two people who’d have never gotten together in the first place were it not for a fluke tragedy. But it’s also a decent father-son story and an even better strained-sibling story. It is also, as you’ll see, a magnificent special-effects movie in depicting the Cotillard character’s loss of limbs. Though the actress won an Oscar for playing Edith Piaf in La vie en rose, I’m not at all sure she’ll deserve to be remembered any more for that memorable turn than this one, a standout in a good 2012 movie year.
Read the Full Review