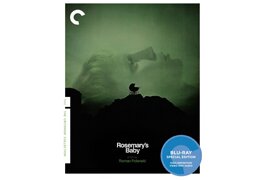 Criterion, Horror,  $29.95 DVD, $39.95 Blu-ray, ‘R.’
Stars Mia Farrow, John Cassavetes, Ruth Gordon, Sidney Blackmer.
1968. Critical hits that blast commercial four-baggers out of the park still happen very occasionally, but Roman Polanski’s instant classic of Ira Levin’s everyone-read-it novel was and is about as good as commercial filmmaking gets — not that the picture was any marketing natural in those days before The Exorcist, The Omen and all that Polanski’s first Hollywood career wave-maker sparked. Ruth Gordon got the year’s Best Supporting Actress Oscar as Rosemary’s batty apartment neighbor and Satan partisan — and Sidney Blackmer is good as her husband, who helps the younger woman’s husband achieve professional success as an actor (Yamaha commercials and more) making a literal deal with the devil. But then, the picture is a kind of casting director’s delight for veteran character actors of the day, including Ralph Bellamy, Maurice Evans and Patsy Kelly. The movie hasn’t lost a beat, especially in Criterion’s rendering.
Extras: It’s surprising to hear producer Robert Evans (featured on an excellent 45-minute Criterion look-back with Polanski and title lead Mia Farrow) talk of how it was such a tough picture to sell. We learn in the documentary that while in bed with then-spouse Farrow, Frank Sinatra read the script and said that he couldn’t see her in the part — which added to the actress’ insecurities regarding the role. We also hear the famous the story about how Sinatra, chagrined that the Baby shooting schedule made it impossible for her to appear with him in 1968’s The Detective, served her with divorce papers on the set (though they remained good friends until Sinatra’s death). Another full-length documentary focuses on composer Krzystof Komeda, who died not long after the film premiered.
Read the Full Review

Sony Pictures, Music, B.O. $0.22 million, $30.99 DVD, $35.99 Blu-ray, ‘PG’ for language, including some drug references and brief, thematic material.
2012. The two (male) rock troubadours truest to themselves are probably Bob Dylan and Neil Young, so there’s a kind of beauteous symmetry to the fact that Martin Scorsese has chronicled one on screen and Jonathan Demme the other, given that the latter duo are the two filmmakers of note (both Oscar winners, in fact) who are the closest to be walking versions of the Rock and Hall of Fame. Journeys is, in fact, the third screen outing that Demme has undertaken with Young, following 2006’s Neil Young: Heart of Gold and 2009’s Neil Young Trunk Show. Of the three, Journeys has to be the one most fashioned toward the hardcore, in that it is a diminutive and certainly intimate portrait of the singer-songwriter at home in Canada, wrapping up a worldwide tour in Toronto, to which he journeys from hometown Omemee in a 1956 Ford Crown Victoria (none of this limo, or even chauffeur, stuff with him). Lack of pretension, of course, has always been a key component of Young’s appeal — complete with his take-it-or-leave-it vocal stylings and wardrobe choices that pretty well come down to which pair of grungy jeans we’re going to wear tonight. One gets a complete sense here of the roots-engendered stability that has kept Young from veering off the track in ways that have turned so many rock stars into a train wreck. Cruising through Omemee, Young takes us past the school that was named for his community-prominent father, and we also meet his brother. The concert portions’ stripped-down sets are taken to great extent from Young’s 2010 Le Noise album, though some of the highlights here come from deep catalog — as when he revives 1970’s “Ohio,” a salute to the four victims of that year’s Kent State killings. These are predominantly tight close-ups of a professional doing his job, which means this is a screen endeavor for the devoted.
Read the Full Review