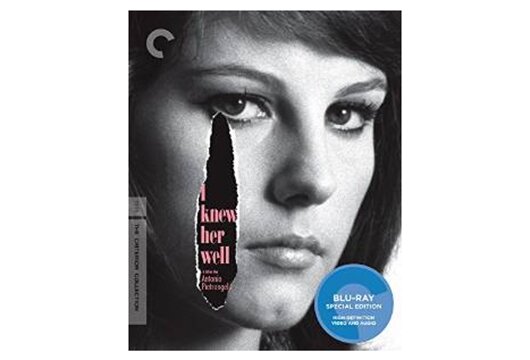 I Knew Her Well

Criterion, Drama, $29.95 DVD, $39.95 Blu-ray, NR.
Stars Stefania Sandrelli, Mario Adorf, Jean-Claude Brialy.
1965. This vastly underseen Italian import, about someone without too much ammo at her disposal trying to exploit the one commodity she has (looks) to survive in a pool of male sharks, is enough of a discovery to make one wonder how many other submerged treasures there are out there from the ’60s. The 4K spiff-up is so easy on the eye that we’re again reminded of Criterion’s consistent prowess at rendering black-and-white.
Extras: There’s a good backgrounding essay by journalist/author Alexander Stille about the societal changes in ’60s Italy that led to a cinematic re-emphasis from the rural to the metropolitan; a Stefania Sandrelli interview plus her original screen test; and an interview with scholar Luca Barattoni on the career of writer/director Antonio Pietrangeli.
Read the Full Review